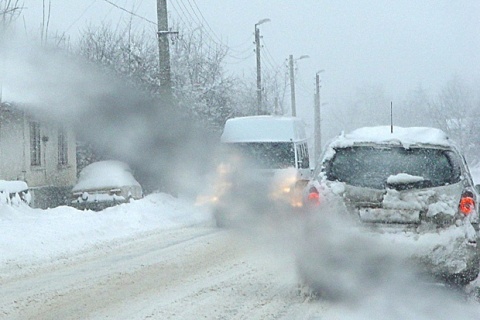 A number of roads and mountain passes in Bulgaria are closed over the heavy snow fall. File photo

The situation in Bulgaria remains difficult and serious Friday in the aftermath of the blizzard that gripped the country Wednesday and Thursday.

Seven municipalities have declared emergency situation. According to data from the power utilities – about 121, mostly small and difficult to access villages, remain without power.

Teams of the power utilities, Civil Defense, Fire Rescue Services and police are working round-the-clock to restore power, clean the roads and rescue people in automobiles stuck in snow drifts.

The situation is extremely serious in northeastern Bulgaria – in the regions of Ruse, Dobrich, Varna, and Razgrad, where the snow is continuing.

All traffic in the Dobrich Region is banned over the snow-covered roads. Tractor trailers of over 10 tons are banned all over Bulgaria.

A number of mountain passes in the Stara Planina (Balkan) mountain rage are closed; tractor trailers are banned and tire chains are required for the open ones such as "Republica,""Shipka" and "Petrohan."

All roads on the territory of the Dobrich Region are closed as is the road between the Black Sea cities of Varna and Burgas, and the one between Sozopol and Primorsko over flooding from the Ropotamo river.

A number of municipalities have also closed schools.

About 4 400 customers of the Power Utility CEZ, serving western and southwestern Bulgaria, are without electricity over the heavy snowfall, the company announces. They are mainly in the regions of Sofia, Vidin and Vratsa.

CEZ assure that emergency teams have been sent and are trying to reach all locations where damage is reported. At places, their work is hampered by fallen trees and snow-covered roads.

The weather forecast is for the snow to subside even in eastern Bulgaria by the late afternoon, but it will be freezing cold in the next several days.