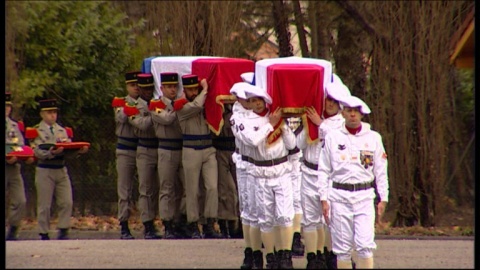 At a ceremony in the southeastern town of Varces, Sarkozy said the troops gunned down were victims of a Taliban rebel who had infiltrated a military base stationed jointly by French and Afghan forces.

“Four of our soldiers were shot in Afghanistan, victims of the most cowardly of crimes. While unarmed, they were slaughtered by a Taliban wearing the uniform of an ally’s army. We will not allow ourselves to be impressed by this barbarity ... that must strengthen us even more in our determination to work for peace,” the French President said in his speech aired on French TV.

The bodies of the French soldiers, including one Bulgarian-born man, who were killed in northern Afghanistan last Friday, after a serviceman from the Afghan National Army opened fire, were transported to Paris on Monday.

On Saturday, the Bulgarian National Radio announced that Bulgarian chief sergeant Svilen Simeonov, 34, was among those killed.

On Sunday, the embassy of France in Sofia issued a statement of regret for the Bulgarian member of the French Foreign Legion.

Simeonov was born in the Bulgarian village of Rakovski, near the northeastern city of Razgrad. The family attended the ceremonies in France but say their son will be buried in his native Rakovski.

After the incident in Afghanistan last Friday, Sarkozy ordered a halt to French training programs for the Afghan military and threatened to withdraw French forces earlier than planned.

However, French Prime Minister Francois Fillon told parliament Tuesday that France is keeping to plans to withdraw 600 troops this year — in line with a previous schedule pegged in part to a gradual U.S.-led withdrawal by 2014.

France currently has about 3,600 troops in Afghanistan. France, the fourth-largest national contingent in the NATO-led force, has lost 92 troops since 2001. The total alliance death toll is nearly 2 560 — mostly Americans.