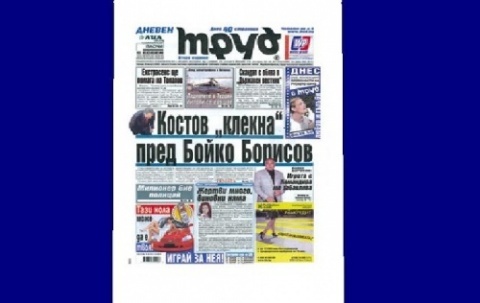 The Bulgarian "Trud" daily has the most readers among print media in Bulgaria, according to a recent poll. File photo

The Bulgarian "Trud" (Labor) daily has the most readers among print media in Bulgaria, according to a poll about the media market in the country, conducted by the MBMD agency.

The "24 Chassa" (24 Hours) and "Telegraph" dailies are second and third, while among the weeklies – "Weekend" and "168 Chassa" (168 Hours) have the leading first and second positions.

According to the poll, TV remains the most preferred source of information in the country, mainly because of the large share of elderly viewers and those with lower education. The largest private TV channel bTV keeps its lead as in previous research, followed by the private Nova TV, and the State-owned Bulgarian National Television, BNT.

The analysis also shows a serious increase in the share of the so-called specialized TV channels, with movie channels such as Diema and bTV Comedy ranking fourth and fifth, respectively.

National Geographic achieved a significant progress and increased its viewers on the expense of Discovery Channel, with an overall increase of viewers of cable TV channels.

Meanwhile, the share of people who never read the press is going down – the trend had started before the October local and presidential elections, and remains after them.

According to the poll, the interest towards print media is almost the same among different age groups, with most readers being between the ages of 30 and 50. 73% of managers and 60% of employers are getting information from newspapers.

82% of readers buy press for entertainment and leisure; 68% say  print media is the best source of information.

The poll further shows that the influence of internet is increasing consistently.