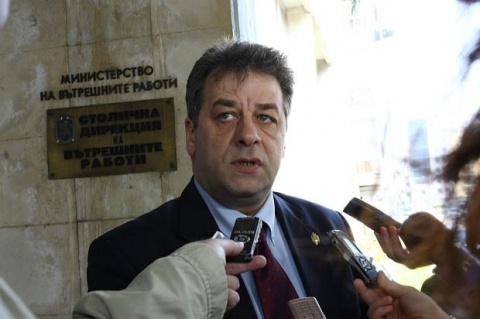 The Head of the Sofia Directorate of the Interior, Commissar, Valeri Yordanov, said he accepts the sanction over allowing police brutality in an operation to counter contraband. Photo by Sofia Photo Agency

The disciplining measures are based on grounds of "lack of control and allowing improper actions against citizens," during a search of a house in the village of Mirovyane, near the capital Sofia.

Over the weekend, Malina and Petar Nachkovi complained of police brutality and reported they have been severely beaten and, with no sound motivation, detained by police, who after that went on to violently break in and search their home.

Krasimir Krastev, who was temporarily in charge of the Second Police Precinct in Sofia, has been demoted – removed from the post and returned to his previous job as a Head of the Business Police Unit at the Fourth Precinct. He has also been punished with a strong reprimand.

Inspector, Boris Mitov, Head of the Countering Business Crime Unit at the Second Precinct has also been punished with strong reprimand over failing to control his subordinates during the police operation.

The SDVR Director, Valeri Yordanov, received a reprimand over violations in the execution of the operation.

"What colleagues have done is that in reality they exceeded, most likely, their rights. We think that in the execution of such operation, maybe, the actions have to be executed in somewhat other way. We want to show that police employees can be responsible, something they do daily," Tsvetanov said.

The sanctions came on the heels of Prime Minister Boyko Borisov's apologies and promises that there will be dismissals at the Interior Ministry over the scandal. He called the hosts of the morning political talk show of the largest private TV channel bTV, while they were having a conversation with the family in question in the studio.

The Nachkovi family explained that they have been detained Saturday in the Sofia "Iliyantsi" district by 20-30 uniform employees of the Main Directorate for Combatting Organized Crime, GDBOP. They pushed and kicked the husband, who later obtained a medical report documenting his injuries. After that, the couple had been taken in two separate cars to their home in Mirovyane, where the policemen broke the door open and took out on the street their younger daughter in underwear.

The operation had been conducted on information that the couple, who owns a small shop, have been storing and distributing goods without excise labels. During the search of their home, however, the policemen only found five packs of cigarettes with no excise tax band on them.

After the search, the husband and wife were placed under arrest, upon which they contacted lawyer Marin Markovski, who managed to have them released.

The whole story prompted Borisov to declare: "Because in Bulgaria people learn how they must do their job only by being fired, there will be dismissals. This is not the way to act during a routine police operation, regardless of guilt or not."

Despite these statements, however, no one has been fired or has resigned.

Meanwhile, Commissar, Valeri Yordanov, said he accepted the sanction and admitted there was no need to conduct the operation in such manner.

It also turned out that Malina and Petar are the parents of Ralitsa Nachkova, their older daughter and creator of Facebook group "I Shall Not Vote for Bulgarian PM Boyko Borisov and the GERB Party."

Borisov and Yordanov fully dismissed any connection between the arrest and the Facebook group, saying the bust was completely arbitrary.