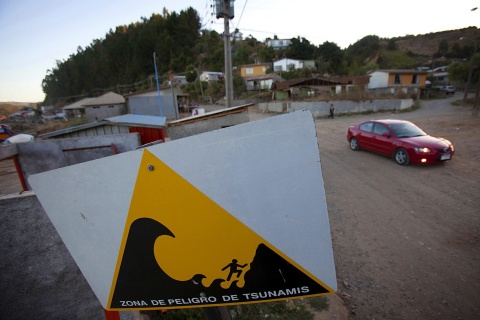 A picture made available on 26 February 2011 shows a sign that indicates `Danger zone due to tsunami` in the locality of Coliumo, affected during the last 27 February 2010 earthquake and the following tsunami that hit Chile, in Coliumo. EPA/BGNES

A 6.2-magnitude earthquake struck Monday off the shore of central Chile, the same area devastated by a massive earthquake in 2010.

There have been no immediate reports of damage and authorities said it would not cause a tsunami, international media reported.

Monday's quake was centered 50 km northwest of Concepcion, and at 20 km deep. But Chile's navy announced that it wasn't the kind of quake to generate a deadly tsunami of the kind that ravaged nearby coastal cities when an magnitude-8.8 quake devastated Chile in 2010.

The US Geological Survey said the earthquake struck at 1:04 p.m. local time (16:04 GMT) with a magnitude of 6.2. Chilean seismologists measured it as a less-powerful 5.8.

Chile's national emergency office said there were no immediate reports of injuries or damage.

The much-stronger quake that struck on Feb. 27, 2010, killed 524 and caused 31 disappearances, wrecking 220,000 homes and leaving USD 30 B in damage. The disaster agency and the navy shared the blame for a botched tsunami warning then that gave some coastal dwellers a false sense of security.