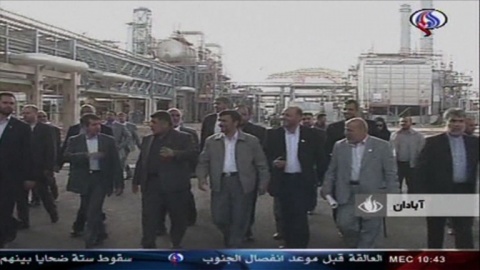 The EU agrees an embargo on Iran`s oil exports as well as financial sanctions as the West ramps up pressure on Tehran`s suspect nuclear drive to press it to return to the negotiating table. File image. EPA/BGNES

"Given the EU's serious and deepening concerns over the Iranian nuclear program, the Council today broadened the EU's restrictive measures against that country. Today's decisions target the sources of finance for the nuclear program, complementing already existing sanctions," the Council declared.

The Council of the EU banned imports of Iranian crude oil and petroleum products. The prohibition concerns import, purchase and transport of such products as well as related finance and insurance. Already concluded contracts can still be executed until 1 July 2012.

In addition, the Council outlawed imports of petrochemical products from Iran into the EU as well as the export of key equipment and technology for this sector to Iran.

New investment in petrochemical companies in Iran as well as joint ventures with such enterprises are also no more allowed.

During a meeting in Brussels on Monday, the 27 EU foreign ministers also agreed to freeze the assets of the Iranian central bank.

Thus, the Council also froze the assets of the Iranian central bank within the EU, "while ensuring that legitimate trade can continue under strict conditions."

Trade in gold, precious metals and diamonds with Iranian public bodies and the central bank will no more be permitted, nor will the delivery of Iranian-denominated banknotes and coinage to the Iranian central bank. A number of additional sensitive dual-use goods may no more be sold to Iran, according to the new measures.

Speaking before the meeting, EU foreign policy chief Catherine Ashton said the sanctions were intended to "make sure that Iran takes seriously our request to come to the table and meet".

The step comes as tensions over Iran's nuclear activities have reached boiling point since the Islamic Republic announced earlier this month that it had launched a nuclear enrichment program at a well-protected underground facility near the holy Shia city of Qom, RIA Novosti reported.

Tehran has threatened to block the Straight of Hormuz, a strategic waterway where an estimated 40 percent of the world's seaborne oil passes, in response to Western plans to ban Iranian oil imports.

Of some 2.2. million barrels of daily Iranian oil exports, 18% is bound for European markets, according to the US Energy Information Administration. Oil exports make up some 60% of the Tehran's revenues.

Greece, Italy and Spain consume a total of 68% of the Iranian oil imported to Europe, with Greece being the largest consumer, accounting for 35% of the imports.

As the EU ministers were preparing to approve the ban, Russian Foreign Minister Sergei Lavrov said on Monday that Moscow had "quite a steadfast hope" that the talks on the Iranian nuclear problem could resume "in the nearest future", as cited by RIA Novosti.

"The EU High Representative [for Foreign Affairs] Catherine Ashton should establish contact with the head of the Iranian Security Council [Saeed Jalili] and based on the results of their contacts, we will push to set a concrete date to resume the talks," Lavrov told journalists in Russia's Krasnodar Region, adding "we will restrain everyone from abrupt moves."

Unilateral sanctions, he said, "do not help" when trying to overcome the Iranian nuclear deadlock.