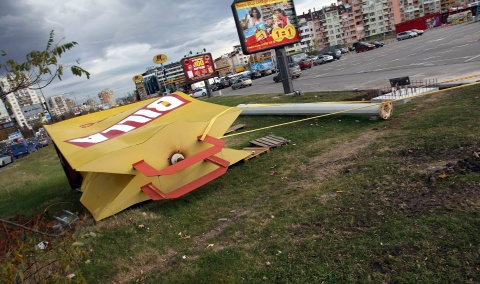 Bulgaria currently has a total of 1900 hypermarkets, supermarkets and drugstores. Photo by BGNES

Chains of stores operating in Bulgaria will keep opening hypermarkets in the country despite weak consumption.

According to a survey published by Capital Daily on Sunday, the companies will continue to optimize their retail network and close loss-making outlets.

One week ago, Belgium-based Delhaize Group announced it was closing six stores from the Piccadilly retail chain in Bulgaria.

Delhaize also said it would shut down the only Tempo hypermarket in Bulgaria, which is located in Sofia, by the end of 2012.

According to data of the Planet Retail consultancy, Bulgaria currently has a total of 1900 hypermarkets, supermarkets and drugstores and their number is projected to rise by 6-7% per year, reaching 2600 in 2016.

Retail chains currently hold a market share of around 34% but the ratio of modern to traditional retail outlets is expected to reach 50:50.

Modern and traditional food retail formats are expected to command an equal share in several years' time, according to Christoph Schulte, member of the Board of directors of Metro Cash and Carry Bulgaria.

In 2012, the Kaufland chain plans to open a store in Sofia's Slatina residential district, a hypermarket is being built in the Black Sea city of Burgas, and one is about to be built in Pleven.

Carrefour intends to open stores in Sofia and Pleven, Picadilly is to unveil 15 new outlets, T-Market plans to open 14 sites and CBA expects to launch at least 5.

Bulgarian supermarket chain Fantastico have said they will not close outlets and are interested in opportunities for unveiling new sites.

The focus will be on finding new spaces to rent to open convenience stores.

Household consumption in Bulgaria has gone up by 2.9% over the past year, according to GfK.

According to data of the National Statistical Institute (NSI), food consumption in the country in Q3 2011 has remained unchanged from Q3 2010.

The trend has not discouraged investors, whose interest in the Bulgarian market is still strong due to the fact that the country has less supermarkets per capita compared to the more developed European countries.