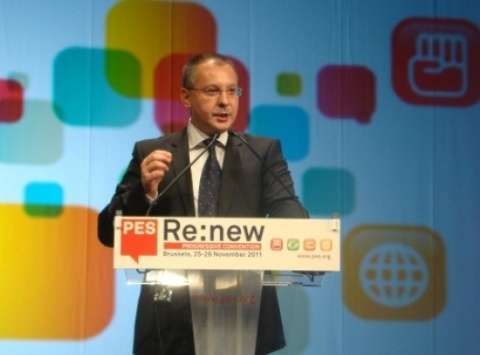 Bulgarian Socialist Party leader Sergey Stanishev speaking at a conference of PES, which he temporarily chairs. Photo by BSP.bg

Bulgaria's new President Rosen Plevneliev needs to be an independent figure to ensure a proper balance of powers in the country, said PES and Bulgarian Socialist Party leader Sergey Stanishev.

Sunday Plevneliev was officially inaugurated in his five year term in office as Bulgaria's President at a solemn ceremony in capital Sofia.

Plevneliev, who swore in as President in front of Bulgaria's Parliament Thursday, was nominated in fall presidential elections by ruling center-right GERB party.

"I am pleased by Plevneliev's commitment to be a non-partisan president, and I strongly hope that he will follow that up in practice," said the socialist leader in an interview for bTV.

At the same time, Plevneliev himself inadvertently let out an unintentional reference to an allegiance to GERB in a statement right after assuming office.

In the interview, Stanishev criticized the government of PM Boyko Borisov for mismanaging Bulgaria's finances and disregarding democratic procedures.

"Never has the Bulgarian Parliament been held in such a low esteem by the executive and perhaps President Plevneliev can contribute to mending that lamentable situation," said Stanishev.

Parvanov chaired the Socialists 1997-2001, before being elected Bulgaria's President for the first time, to be succeeded by Stanishev.

Now sources close to Parvanov have it that he is considering reclaiming the leadership position of BSP at a party congress this spring.

Sources from the Socialist Party report that Stanishev and Parvanov could officially meet at the party headquarters February 4, when Parvanov might also reveal his plans for the future.