France Sorry for Death of Bulgarian Soldier in Afghanistan 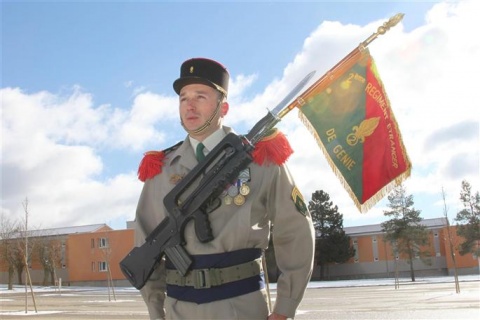 French foreign legionnaire, chief sergeant Svilen Simeonov, a Bulgarian, was among the 4 French soldiers killed in Afghanistan this week. Photo by the Embassy of France to Bulgaria

The embassy of France in Sofia has issued a statement of regret for the Bulgarian member of the Foreign Legion, who was among the 4 French soldiers killed Thursday in Afghanistan.

"The embassy deeply deplores the death of four officers of the French forces killed Thursday by an intentional shooting by an Afghani soldier in their position," says the letter.

Saturday the Bulgarian National Radio had announced that chief sergeant Svilen Simeonov, 34, was among those killed.

"Among the victims, chief sergeant Simeonov, of Bulgarian nationality, fell at the side of his French brothers in arms," recalls the statement.

The French embassy clarifies that Simeonov has been since 2002 member of the 2nd foreign regiment of the Spirit of St. Christol, stationed in the south of France.

It says it has expressed its condolences to Simeonov's family, and is staying in touch with them.

The statement adds that a military service in homage to chief sergeant Simeonov will take place next week in France.