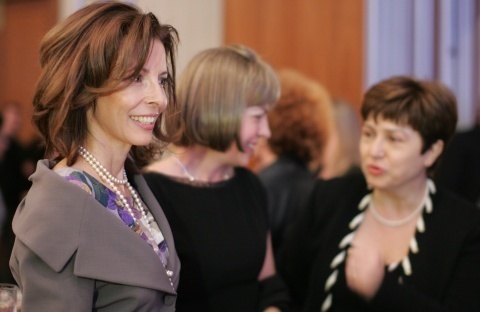 Tsvetelina Borislavova (left) is pictured here at an award ceremony for the most influential Bulgarian women with Sofia Mayor Fandakova (middle) and EU Commissioner Kristalina Georgieva (right). Photo by BGNES

An investment firm led by Tsvetelina Borislavova has increased its majority stake in Bulgarian-American Credit Bank (BACB) following the public offering of its shares.

Borislavova, known also as the long-time, but no longer live-in girlfriend of the Balkan country's prime minister, Boyko Borisov, has subscribed another 506 620 shares, increasing her stake in BACB from 59.37% to 61.43%.

At the beginning of December last year CSIF published a tender offer for acquisition of the shares of the remaining shareholders of BACB. The offered price per share was BGN 4.

The public offering of shares was undertaken in accordance with the terms and conditions of the resolution of BACB's general meeting of shareholders held on July 5.

Bulgaria's central bank gave the green light for the sale of 49.9% stake in the Bulgarian-American Credit Bank by Allied Irish Banks to Bulgarian private equity fund CSIF in the middle of June.

The deal brought back into the banking sector Bulgarian tycoon Tsvetelina Borislavova, more publicly known as the woman with whom Prime Minister Boyko Borisov formerly lived out of wedlock. The sizable purchased was acquired through her company Clever Synergies Investment Fund (CSIF).

BACB is a publicly listed bank based in Sofia, Bulgaria, focused on small to medium sized enterprises. As at 31 December 2010, BACB reported consolidated total assets of EUR 375.9 M and shareholders' equity of EUR 96.6 M.

CSIF is a private investment company founded in 2005; its shareholders are Tsvetelina Borislavova and her foundation Credo Bonum.

In December 2010, Tsvetelina Borislavova, believed to be one of the richest Bulgarians, and described in various rankings as one of the most powerful Bulgarian women, formally left the banking sector as the Belgian banking group KBC acquired full control over its subsidiary in Bulgaria CIBank.

That was the second major acquisition by the Belgian group in Bulgaria, having agreed earlier that year to buy 70% in insurer DZI, later boosting its stake to 85%.

Bulgaria's Economic and Investment Bank (EIBank) changed its name to CIBank in October 2008 without giving reasons for its decision.

The name of the Bulgarian-American Credit Bank recently was in the center of scandalous allegations after German investigative journalist Jurgen Roth alleged that BNB Governor Ivan Iskrov put pressure on the Irish bank, Allied Irish Bank (AIB), former owner of the Bulgarian-American Credit Bank (BACB) in Sofia, to sell a 50% stake to Central Cooperative Bank at the price of BGN 1, the equivalent of EUR 0.5. Subsequently, Roth renounced his accusations.