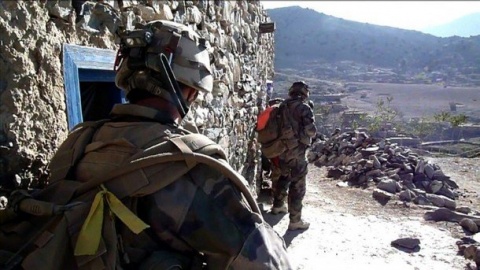 A Bulgarian sergeant serving in the French Foreign Legion is among the four French soldiers ambushed and killed in Afghanistan Friday. Photo by BGNES

The information has been confirmed by the Bulgaria Foreign Affairs Ministry.

Simeonov has served as sergeant in the French Foreign Legion and was among the four French soldiers who were killed in northern Afghanistan Friday, after a serviceman from the Afghan National Army opened fire.

Another 16 French soldiers were injured, some seriously, in the incident in Kapisa province.

In the aftermath, President Nickolas Sarkozy said France was suspending its training programs in Afghanistan while Defense Minister Gerard Longuet left for Afghanistan immediately. Sarkozy also said that the question of an early French withdrawal from Afghanistan would arise if security conditions were not re-established.

Meanwhile, BNR reported that the Bulgarian village of Rakovski, near the northeastern city of Razgrad, had been deeply saddened by the news about Svilen. The Mayor says the date when the body will be transported to Bulgaria remains unknown.

Svilen Simeonov, whose Muslim name is Taner Mehmedov Uzunov, served in the French Foreign Legion for over 10 years. He is married and has a 3-year-old boy. His wife is also from Rakovski, but lives in Razgrad. Svilen's father is retired while his mother lives in Turkey. Relatives say he was killed just days before the end of his service in Afghanistan.

The Mayor said Simeonov changed his name before joining the Legion in 2000.

His wife has last spoken with him on the internet Thursday and he told her he was returning in days to his army unit in Marseille and planned to travel to Bulgaria in February, according to his brother-in-law. This was also Svilen's last foreign mission and he had three years left before being able to retire from service. He had dreamed of buying a house in Marseille and settle there with his family.

France is to bury the perished soldiers with military honors Monday and has provided airline tickets to the Bulgarian family.

"Our soldiers were murdered. It was impossible for them, first of all, to know what was going to happen and secondly to react to this aggression," French foreign ministry spokesman Bernard Valero told the BBC.

The attack brings to 82 the total number of French personnel killed in Afghanistan since 2001.

The Afghan soldier had been arrested by the French.

NATO confirmed in a statement that four of its personnel had been killed, and that a suspect had been apprehended, but gave no further details.

Afghan President Hamid Karzai released a statement conveying "his deepest condolences and sympathy to the French president, families of the victims and to the French people".