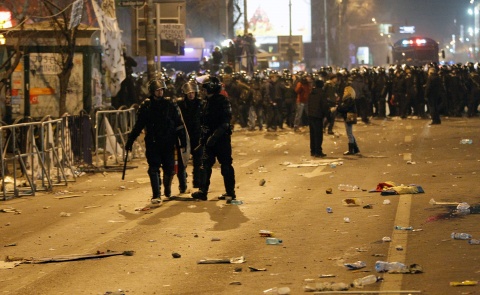 Romanian riot-policemen leave the plaza full of debris after demonstrators were evacuated, during a protest against Romania`s government in Bucharest, Romania, 19 January 2012. EPA/BGNES

The US has asked the Romanian authorities and people to avoid the violence that has been reported every day over the last week in the country, US State Department spokesperson Victoria Nuland announced at a press briefing.

The US reaction comes after new clashes between protesters and riot police were reported in Bucharest late Thursday night.

"What we would say to Romania and Romanians is the same thing that we say to others around the world and what we said to Greece and Greeks at the time, which is that we support the right of people around the world to protest and express their views peacefully, but we call on both protestors and authorities to refrain from any violence," Nuland added during a press briefing on January 19.

While not trying to dictate how Romania deals with its internal issues - as these are decisions the Romanian Government should take in consultations with the parliament and with the citizens, the US State department message highlighted that all countries need to make individual national decisions and that the policy is to help deal with the financial crisis.

Street protests demanding the resignation of President Traian Basescu and the government of Prime Minister Emil Boc started a week ago in Romania and became violent last Saturday evening (January 14).