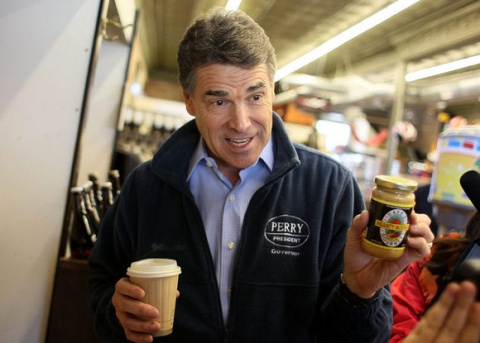 Texas Gov. Rick Perry holds up a jar of "Insanity Mustard" at the Acme General Store during a "meet and greet" on Trade St. Jan. 18, 2012 in Greer, S.C. Photo by Getty Images/LA Times

Texas Governor Rick Perry has confirmed Thursday earlier reports he is quitting the presidential primaries currently held by the US Republican Party.

"There is no viable path forward for me," said Perry in Charleston, South Carolina, where the primary vote is to be held Saturday, reports the NPR.

The Texas Governor had just scored a disappointing performance in the Iowa and New Hampshire votes, ranking fifth and sixth, respectively.

Earlier, Perry had faced calls to drop out of the race to compel conservative voters, whose support has been divided among several conservative candidates, to rally behind Gingrich in hopes of stopping Mitt Romney, reports CBC.

Thursday it was ex House of Representatives Speaker Newt Gingrich that Perry chose to support ahead of the South Carolina vote.

"Gingrich is not perfect, but is a conservative leader who will bring about real change," said Perry, as quoted by the NPR, also adding that the road down which President Barack Obama is leading the US "a very dangerous one."

The republican Texas governor further clarified that he was "neither discouraged nor disenchanted" by his performance, but rather "highly rewarded by the experience."