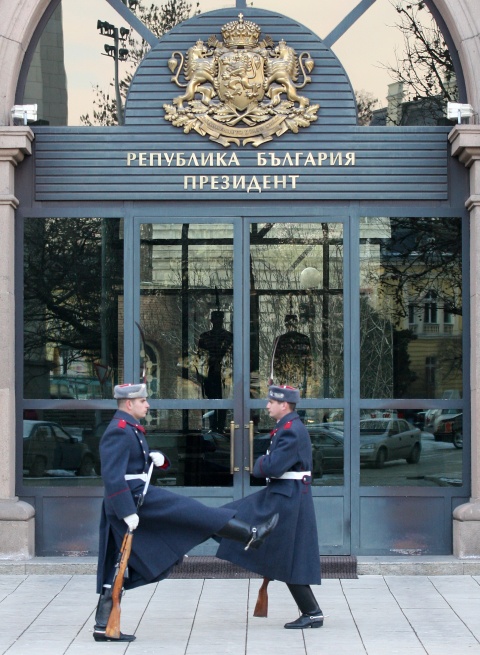 Pictured: The honor guard before the main entrance of the Bulgarian Presidency. Photo by BGNES

47-year-old Plevneliev, a candidate of the ruling center-right party GERB of Prime Minister Rosen Plevneliev, won over 50% of the vote in the run-off of the Bulgarian presidential elections Sunday, beating his opponent, Socialist candidate Ivaylo Kalfin.

He is thus going to assume the position of President of the Republic of Bulgaria in January 2012, after the end of the second and last term of outgoing President Georgi Parvanov.

The first democratically elected President of the Republic of Bulgaria was Zhelyu Zhelev; he was first elected by the Grand National Assembly for an interim one-year term in 1991-1992.

After the 1991 Constitution was adopted to seal the end of the communist regime in Bulgaria, Zhelev got elected in January 2012 in Bulgaria's first ever democratic presidential elections, beating Socialist Party candidate Velko Valkanov.

He served one term before losing the rightist Union of Democratic Forces primaries to Petar Stoyanov.

In 2001, however, Stoyanov, failed to secure a second term, losing to Socialist Party leader Georgi Parvanov back. Parvanov's win came as a surprise.

In 2006, Parvanov became the first ever Bulgarian President to be reelected; he beat in the run-off Volen Siderov, the vocal leader of nationalist party Ataka.

Under Bulgaria's Constitution, the President serves a five-year term, and has a two-term limit.