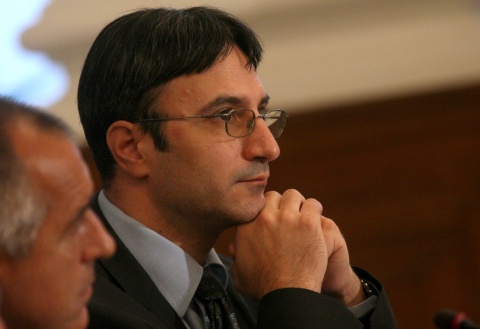 Bulgaria's Minister of Economy and Energy, Traicho Traikov, says he never expected that the debate on exploration and extraction of shale gas in Bulgaria would turn so extreme. Photo by BGNES

The cabinet of the ruling, center-right Citizens for European Development of Bulgaria party, GERB, withdrew Tuesday its decision granting rights to sign a contract with the US company "Chevron."

The news was reported by the Minister of Economy and Energy, Traicho Traikov, speaking after the meeting of the Council of Ministers.

"The idea is to give the company rights to conduct studies, exploration and extraction of oil and gas by the use of conventional technologies, but to ban the hydrofracking technology – the latter will be allowed only when we receive convincing proof and means of control that it would not be harmful to the environment.

The previous permit allowed "Chevron" to search for natural gas and oil without specifying what technology will be used.

"Each company, which has a permit to explore natural gas and oil presents, a general work program and a yearly one, which describes the methods and they must be approved. Nowhere in the requirements for the bid or in the offers, there was mention of technology. I never expected that the debate will turn so extreme," Traikov said.

The Minister had further offered to the Parliamentary Economy Committee to initiate the establishment of a group with the Parliament to study and survey all international practices, all facts, and scientific research in order for an informed decision on the issue to be made. Such ad hoc group was recently established at the European Commission.

In the summer "Chevron" was declared the winning bidder for the extraction of shale gas, near the town of Novi Pazar, in northeastern Bulgaria, but without a preliminary environmental assessment. The company had a 5-year deadline to prepare a program for the exploration. At that time, the cabinet gave Traikov the green light to prepare a contract to include the use of hydrofracking technology.

According to the Minister, "Chevron" had not yet been notified about the latest development and negotiations on the issue are pending.

One day earlier, the Parliamentary Economy Committee passed a controversial moratorium on the exploration and extraction of shale gas a day after mass protest rallies took place in 12 Bulgarian cities over the issue.

On Tuesday, Valentin Nikolov, deputy head of the GERB Parliamentary group and of the Committee, stated that the group is proposing a full ban on the use of the hydrofracking technology on Bulgarian territory.

The decision is going to be debated by all Members of the Parliament Wednesday. Environmentalists are staging a mass protest rally and march for the same day.

The moratorium will be lifted when amendments in the Preservation of Environment and Water Act are passed, introducing a requirement for Assessment of the Impact on the Environment for future exploration was a text in the moratorium that further angered eco activists in the country.