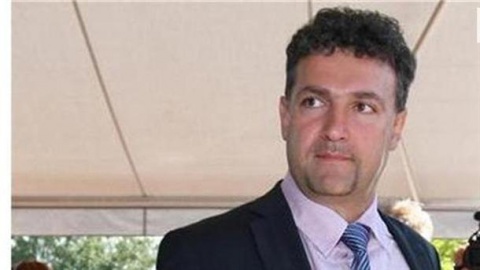 Key GERB MP Valentin Nikolov has championed the adoption of the temporary ban on shale gas exploration, which however has been slammed by NGOs as a deceptive move. Photo by 24 Chasa daily

Bulgaria's Parliamentary Energy Committee - dominated by the ruling center-right party GERB - has approved a temporary ban on the exploration and extraction of shale gas a day after mass protest rallies took place in 12 Bulgarian cities over the issue.

However, GERB's move has been immediately slammed by eco-activists who were quick to react that the temporary moratorium was only designed to shut them up, and carried little actual weight with respect to the problems posed by potential shale gas extraction.

The draft legislation for a temporary moratorium was adopted by the Energy Committee in the Bulgarian Parliament late Monday night after four hours of debate.

Essentially, the Parliamentary Group of the GERB party accepted the proposal of the opposition the marginal conservative party RZS ("Order, Law, Justice") for a temporary ban on shale exploration with amendments made by Valentin Nikolov, deputy head of the GERB group and of the Energy Committee.

Before that, however, the ruling party rejected the more comprehensive shale gas moratorium proposals presented by the Bulgarian Socialist Party, and the nationalist party Ataka.

Key ruling party MP Valentin Nikolov himself explained that the moratorium will have only a temporary character, as cited by Darik Radio.

In his words, the ban will be in place until the Ministry of Economy, Energy, and Tourism, and the Ministry of Environment and Waters come up with amendments of the Bulgarian legislation that "guarantee" that the hydraulic fracking method used for shale gas exploration and extraction "will not hurt the environment".

"The moratorium will be in place until the two ministers write the amendments which will them have to be adopted by the Parliament," stated the key MP, while saying that the GERB party made no commitment as to when the ban will be adopted.

The Energy Committee of the Bulgarian Parliament convened at an emergency meeting Monday night in response to the mass protests against shale gas exploration and extraction that took place of the weekend all across Bulgaria.

Environmentalists and representatives of civic NGOs stated immediately after the Parliamentary Energy Committee sitting that they feel cheated by Bulgaria's ruling party GERB, and that they will keep up their protests against the exploration and extraction of shale gas in Bulgaria until an all-out ban is in place.

The anti-shale gas movement is rapidly gaining momentum, with its Facebook group featuring 55 000 members as of mid January 2012. The people in Bulgaria are mostly concerned with the effects of the extraction and exploration method known as hydraulic fracking, which is said to be poisoning underground waters as a result of the use of chemicals.