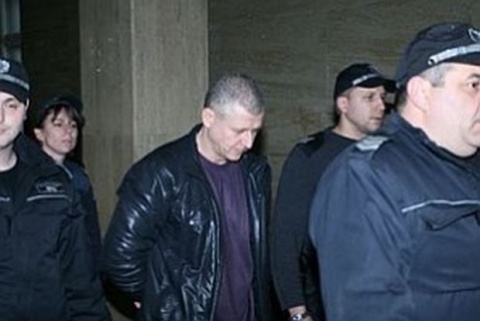 Shumen Prosecutor Rumen Penev (middle) was sent into house arrest; he is charged with demanding and receiving a BGN 25 000 bribe. Photo by BGNES

A Bulgarian prosecutor from the northeastern town of Shumen, who was busted with a bribe, will be kept under house arrest, the Sofia City Court ruled Monday night.

Rumen Penev from the Regional Prosecutor's Office in Shumen was arrested with a bribe on January 13, 2011.

In its house arrest ruling, the Sofia City Court accepted that there is a "reasonable suspicion" that Penev committed the crime that he is accused of.

The prosecution has found that Penev demanded a BGN 25 000 bribe, and received BGN 21 000 in order to help terminate an investigation carried out by one of his colleagues, Prosecutor Yanko Zhelezov in Shumen, against a local attorney, Nayden Nikolov.

Witness testimonies have confirmed that Penev could influence Zhelezov because the two are known to be friends.

The Sofia City Court said, however, that the suspect can hardly escape, and that it could not imagine that he might commit another crime but is ordering his house arrest to prevent him from going to the Regional Prosecutor's Office in Shumen, and trying to influence witnesses.

Prosecutor Rumen Penev accepted the bribe in order to influence the investigation of a dispute between attorney Nayden Nikolov, and a former client of his, Dencho Denev, who claims that Nikolov took from him an excessive fee that he was not entitled to, which amounted to BGN 11 000.

Nikolov's own lawyer Zhivko Zhechev is revealed to have met with Prosecutor Rumen Penev in October 2011, which is when Penev demanded the BGN 25 000 bribe by writing the sum down on a yellow piece of paper.

When Zhechev objected that the demanded bribe was more than twice the sum Nikolov is investigated for, Penev replied that Nikolov has plenty of money.

Zhechev and Penev met again several days later but failed to strike a deal on the bribe amount, which is when Nikolov's attorney Zhechev backed out of the "talks".

Subsequently, however, Nikolov himself got in touch with Penev, and they met on January 5, 2011. During the conversation, Penev told Nikolov he knows the latter has a valuable arms collection of some 100 items that will be taken away from he if he is charged and loses his permit to bear arms.

However, Nikolov alerted Bulgaria's unit for combating organized crime GDBOP about Penev's bribe request a month before that, on December 16, 2011. The bribe of BGN 21 000 that he later gave to Prosecutor Penev was provided by him in marked banknotes by GDBOP in Sofia.

If found guilty of bribery and malfeasance, Penev could get up to 6 years in jail, and a fine of BGN 5 000.