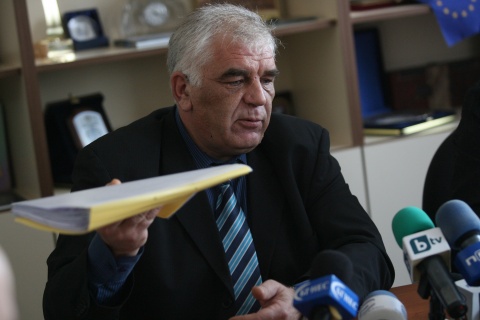 Customs Agency head Vanyo Tanov has assured that the postponement for the installation of measuring devices at the Rosenets oil terminal will not create problems. Photo by BGNES

The Lukoil Neftochim refinery in the Black Sea city of Burgas was awarded Monday protocols certifying the compliance of its measuring equipment with the statutory requirements.

Starting Monday, the operations of the oil refinery are in line with the provisions of the Excise Duties and Tax Warehouses Act, according to a statement of the customs authority's press office.

The protocols stating the conclusions of the inspection at Lukoil's Rosenets oil terminal, where the installation process has not been completed, will be handed by the end of next week.

Lukoil's tax warehouse operator permits for the Neftochim refinery and the Rosenets oil terminal were revoked by the Customs Agency on Jul 22 after it failed to observe the June 26, 2011 statutory deadline for the installation of electronic devices reporting incoming and outgoing volumes to the National Revenue Agency (NRA).

After lodging an appeal against the preliminary execution of the individual administrative acts issued by the Customs Agency head, the Neftochim refinery was allowed to stay in operation until the case was resolved with a verdict on the grounds that a disrupted production process would result in "substantial or hard to repair damages" for the company.

The temporary production halt at Lukoil Neftochim caused Bulgaria to tap state reserves for jet fuel for the airports in Varna, Burgas and Sofia.

Rosenets' partial compliance with the statutory requirements was made possible by amendments to an ordinance allowing the Customs Agency head to extend the deadline for the mandatory installation by 2 years.

In the beginning of January, Tanov insisted that the postponement would not create problems because the ordinance had been modified so as to provide guarantees that the level gauges at all reservoirs and the existing software ensured real-time submission of fuel volumes' data to the customs administration.

He clarified that the Rosenets oil terminal would be operating on a suspended license in the next two years, the main condition being that it cannot receive and release fuel supplies on the market simultaneously.

The lawsuit opened by the refinery against the Customs Agency over the revoked license is still underway.