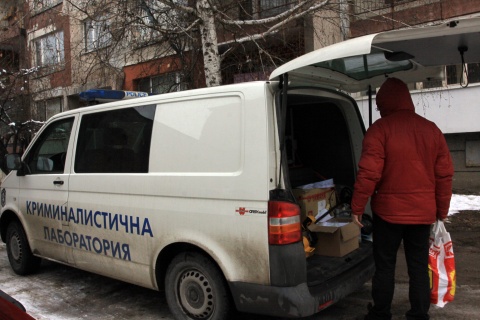 Police in Bulgaria's western city of Pernik came under fire for letting a suspect commit suicide in their presence. Photo by BGNES

Murder suspect, Mario Lyubenov, 25, AKA Zaeka (The Rabbit) was not listed in a psychiatry ward in Bulgaria's western city of Pernik, near the capital Sofia.

Psychiatrist, Dr. Robert Krumov, cited by the Bulgarian news agency BTA, said Monday that between December 2009 and July 2011, Lyubenov had never shown any signs of schizophrenia. Krumov is an expert with the Pernik Regional Court and has monitored the suspect during this period.

On Sunday, residents of Bulgaria's of Pernik staged a protest with demands for justice and punishment of the perpetrators of the murder of a local teen girl.

The parents of the girl, her classmates, friends, mothers of other murdered children, gathered in front of the police precinct building in the city, saying they harbored strong doubts that the killers of Miroslava Nikolova, 17, will be punished.

At the rally, the mother of the murdered teen demanded a five-member psychiatry expert panel to examine Mario, saying she did not believe in his diagnosis and that anyone can get a piece of paper, after paying accordingly. Mario is currently listed in a psychiatry ward in Sofia – the so-called "4th Kilometer" hospital.

Krumov said Monday that Lyubenov first visited him in his office at the end of 2009 and brought a folder with documents from the Sofia clinic "St. Naum," containing 12 documents that he had been diagnosed with schizophrenia. The patient had to continue treatment in Pernik. The psychiatrist regularly gave him prescriptions, but found out Mario never took any medications, and all his complains were like they have been taken out of a textbook.

In April 2011, during a pre-trail proceeding in a probe of a lab for counterfeit money, Krumov signed an expert report where he concluded that Lyubenov either had to be taken by force back to "St. Naum" for additional proof or revocation of the diagnosis for schizophrenia.

"I am the first one to cast a doubt on the diagnosis. Mario found out and stopped visiting me. I think his is in the Sofia hospital due to my report, but I have no idea why the delay," the psychiatrist pointed out.

Miroslava Nikolova's dead body was found by the police in the suburbs of the city about 11 am on Thursday after two months of active search, which involved the information systems of Schengen and Interpol.

The other suspect arrested for the murder of the teen girl committed suicide as police searched his home in Pernik, near Bulgaria's capital.

After his arrest, the man identified as Stoycho, aka Chocho, was brought home by the police. As the latter searched the apartment, he got hold of a pistol and shot himself in the head. It remains unclear where the suspect was hiding the gun and how the policemen let him kill himself in their presence.

The teenager disappeared on November 7, 2011 and was missing ever since. On the fatal day, the girl went to her regular taekwondo training and never went back home. Friends said she was in good spirits while in the sports hall and there were no signs of the tragedy that unfolded later on.

According to unconfirmed media information, Mario was a classmate of Borislav – boyfriend of Miroslava's sister, Eleonora. The girl was kidnapped because Borislav recently inherited a large amount of money and the perps planned to ask him for ransom. They told police they killed Miroslava because they had no means to take care of her.

Recently, Miroslava's sister Eleonora told bTV channel that the two had one telephone conversation. Miroslava managed to tell her sister that she was kidnapped and policemen were involved in the crime. The kidnappers however never called to set their conditions.

Authorities suspected the girl may have been trafficked aboard as a white slave. Some assumed that she may have fallen in love with someone who is part of a scheme for human trafficking and voluntarily fled the country.

Many locals were inclined to believe that the missing girl ran away from home, a speculation her sister has dismissed as "ridiculous".

Miroslava left her home without documents or money.