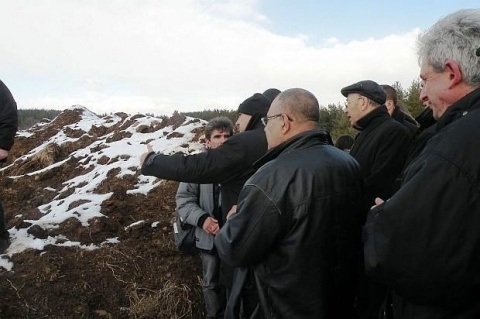 Bulgarian PM Borisov (middle, with extended arm) in talks with local archaeologists on the new section of the Hemus Highway near Shumen. Photo by Darik

Bulgaria’s Prime Minister Boyko Borisov has made a deal with archaeologists digging on the route of a northern highway, after a few days ago he mistreated their colleagues blaming them for potential construction delays.

Borisov and Pavlova visiting the 8-km section between the city of Shumen and village of Belokopitovo whose construction began in 2011, before the village of Panayot Volovo and the junction with the road to the Danube city of Ruse.

The agreement that the Prime Minister made with the local archaeologists from the Regional History Museum of Shumen, who are excavating the route of the future highway, states that by the end of next week the archaeologists will determine a deadline for the completion of their work.

“I want a fair answer from,” Borisov told them, saying also that the funding of the Hemus Highway section in question will be continued so that it could be built by the deadline of September 30. He also promised further funding for the excavations and additional equipment for archaeologists on the spot.

On Wednesday, during a similar inspection, the PM shocked many, when he treated local archaeologists in a surprisingly offensive fashion with respect to an archaeological site found during the construction of the southwestern highway "Struma."

Borisov and his Cabinet have already expressed their discontent over the fact that the very recent discoveries of Thracian archaeological sites along the route of the Struma Highway might delay its construction. In December 2011, Borisov accused the archaeologists of "racketeering" the state.

The Bulgarian government’s major concern has been that the archaeological digs might delay the entire projects for the highway construction, thus leading the state to lose the negotiated EU funding.

When completed, the Hemus Highway, whose construction began in the distant 1975, during the Communist regime of dictator Todor Zhivkov, will connect the capital Sofia with the Black Sea city of Varna via Northern Bulgaria.