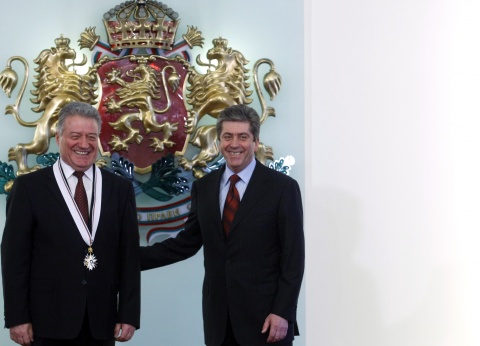 A total of 209 felons with harsh sentences for high-profile crimes have been pardoned during the presidential term of Bulgarian President Georgi Parvanov and Vice President Angel Marin, out of several hundred pardoned in total.

The data comes from the "Sentence Execution" Chief Directorate at the Bulgarian Justice Ministry, as cited by BGNES Friday night – amidst the raging scandal between President Georgi Parvanov and VP Marin on the one hand, and Prime Minister Boyko Borisov on the other, regarding Marin's decoration with the highest state order in the Republic of Bulgaria - "Stara Planina" - 1st degree.

Some of the criminals pardoned by Vice President Angel Marin were sentenced to 30 years in jail, 9 had sentences of over 25 years; 37 of them were supposed to spent 20 years behind bars; 192 of those pardoned had jail terms from 11 to 20 years; and 180 convicts had sentences up to 10 years in jail; only 10 pardoned prisoners had light sentences of less than a year.

The BGNES news agency emphasizes the "shocking" fact that 209 of those who were pardoned by Bulgarian Vice President Angel Marin and President Georgi Parvanov (it is mainly the VP who handles the pardoning of prisoners) have been sentenced for severe crimes such as murders, kidnappings, assaults, enticement into prostitution, and human trafficking.

However, the list of those who have been pardoned remains secret; the Bulgarian Presidency refused to reveal to the public the identity of the pardoned convicts.

The only information on the pardoning of criminals in on the website of the Bulgarian Vice President solely contains figures without making it clear who, when, and why was pardoned, and what their sentences were.

Of the 431 criminals pardoned by Marin and Parvanov, 333 were partially pardoned, and 98 were fully pardoned. BGNES reminds that during his first term (2002-2007), shortly before the Bulgarian presidential elections in 2006, Marin pardoned Roma boss Tsvetelin Kanchev.

Kanchev, back then a Member of Parliament from the Euro-Roma party, was originally sentenced to 6 years in prison back in 2000 on six counts, including racketeering and the beating of a businessman from the town of Zlatitsa. After serving 4 years in the central prison in Sofia, Kanchev was released on bail by the prison authorities because of "good behavior", and was then pardoned by Marin so he never returned back to jail.