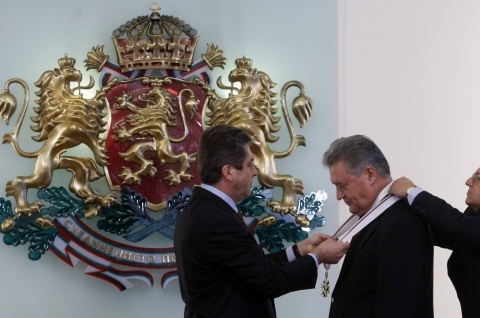 Angel Marin was bestowed the state order by President Georgi Parvanov just ten days before the end of their second and last term. Photo by BGNES

Duding a cabinet meeting earlier this week, Borisov said he was baffled at the fact that Marin received the medal, it was revealed on Friday.

"I do not know in what way Angel Marin has deserved the Stara Planina order, I do not get it," the Prime Minister said, adding that he hoped newly elected President, his party's former Regional Development Minister, Rosen Plevneliev will be more careful in giving away state medals.

In a statement released by Parvanov's press office on Friday, the President pointed out that it was Borisov who signed the decree which allowed Marin to receive the top medal.

On Friday, Parvanov further declared that he remained "highly critical towards the boorish, vulgar and cynical talk on behalf of Boyko Borisov which, unfortunately, does not take place for the first time."

The President described the Prime Minister's statements from the last two days as "shocking", probably referring to Borisov's infamous comments that followed the death of a young girl in the city of Pernik, as well as the insulting remarks with which he addressed archaeologists on Wednesday.

He was bestowed the state order by Parvanov just ten days before the end of their second and last term.