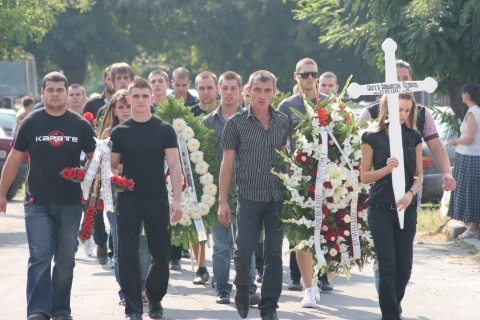 The man who allegedly ran over and killed with his van a teenager in the village of Katunitsa, triggering a wave of violent protests against a Roma baron, has been charged with manslaughter.

The prosecutors announced on Friday that the indictment against Simeon Yosifov has been tabled in court.

Yosifov, 55, from the Stolipinovo Roma district in the second largest Bulgarian city of Plovdiv, near Katunitsa, faces 10 to 20 years behind bars if convicted.

The September 23 murder of Angel Petrov, 19, who was deliberately run over by a mini van, driven, according to witnesses, by a relative of notorious Roma baron Kiril Rashkov, led to massive protests of ethnic Bulgarians in the village and the whole country.

Currently, the investigation is declining to comment if Petrov's murder has been ordered, but two days before he died the young man had filed a claim with the Asenovgrad police that he had been threatened.

The Prosecutor's Office is also not saying if Rashkov and Yosifov are relatives.

Witnesses however claim that the man arrested for the murder, Simeon Yosifov, is not the person who had driven the van during the fatal night.

They claim that the real murderer was sent to Turkey and was replaced by an individual who knew nothing about the incident and can not reveal anything about Kiril Rashkov, aka Tsar Kiro, during police interrogations.

According to official police reports, after committing the crime, Yosifov briefly escaped to neighboring Turkey, but relatives convinced him to come back. He was arrested upon his return.