Bulgaria Scrap Dealers Threaten to Move Base to Romania, Greece 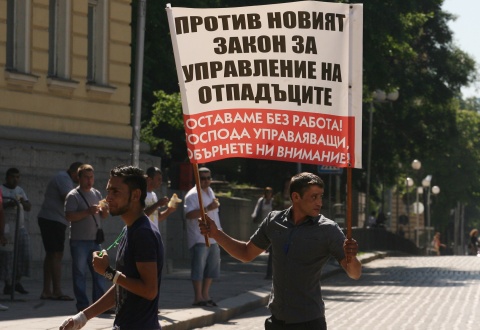 Representatives of scrap metal dealers and recycling companies claim that the new law will force many companies dealing with metal scrap to cease their activities. Photo by Sofia Photo Agency

Bulgaria's metal scrap dealers have threatened to move businesses to neighboring Romania and Greece to escape the heavy blow they will be dealt by a new bill.

"A large number of all 800 companies that are dealing with trade in ferrous and nonferrous metals, will move to Romania and Greece because of severe prohibitions which the bill envisages," Borislav Malinov, chairman of the Bulgarian Association of Recycling, has warned.

Moving bases abroad will allow the companies to steer clear of the ban on buying scrap of unclear origin and from individuals.

Representatives of scrap metal dealers and recycling companies claim that the new law will force many companies dealing with metal scrap to cease their activities.

They insist that the existing draft Waste Management Act, prepared by the Bulgarian Ministry of Environment and Water, be instantly withdrawn.

The mandatory deployment of non-cash payments in scrap metal trade and the proposed 2013 ban on natural persons trading in black and colored metals were two key aspects of the draft Waste Management Act that drew the ire of the people from the sector.

At a series of rallies staged last year the scrap traders, who claim to work legally, called for a wide social participation in the preparation of a new law to favor the interests of Bulgarian society and the business sector that complies with the rule of law.

The metal dealers, who work legally, say they pay taxes and require the identity card of the person, who brings the metal to the shop. The name of the person is recorded in a registry, which can be checked by the authorities at any time.

Those who work illegally take everything, all the scrap is then sent to illegal foundries and thus formally legalized.

The ministry has justified the strict measures with the need to step up the combat against thefts of ferrous and nonferrous metals. The new regulations will begin to come into force next week.