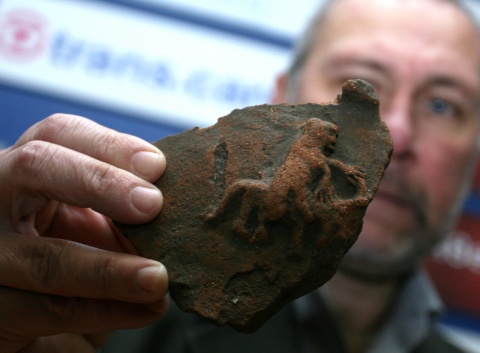 A ceramic relief of an Ancient Thracian horseman, a major ancient deity, has been found at the holy rock city of Perperikon by Bulgarian archaeologist Nikolay Ovcharov.

Prof. Nikolay Ovcharov, also known as the Bulgarian Indian Jones, presented his find before the media on Thursday.

In his words, the relief dates back to the end of the 4th century BC and the start of the third century BC, the Hellenistic Age of Ancient Thrace.

It is said to be an extremely valuable find from the time when the Thracian started to hold in reverence the so called "Thracian Horseman" as a deity, also known as the (Thracian) Heros.

The relief is part of an urn; it depicts a horseman with reins in his right hand, and a sword-like object in his left hand.

Ovcharov explained that the earliest similar finds date back to the 5th century BC, and consist of reliefs encrusted in gold or silver.

The newly found ceramic relief of the Thracian Horseman is primitive but it is taken to demonstrate that its stemmed from Thracian culture in the early Hellenistic Period.

The ancient rock city of Perperikon in the Rhodope Mountains contains remains from all archaeological periods. It was first excavated in 1979.