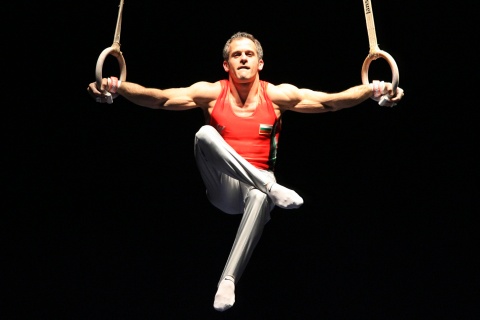 The living legend of Bulgarian male gymnastics, Yordan Yovchev, has won a quota for the London Summer Olympics, which will be his sixth participation in Olympic Games.

On Wednesday, the fourth times world champion scored a total of 82.698 points in the all-round competition and ranked among the top 30, which qualifies them for the games.

The rules give each country one quota. Before the competition, Yovchev, who is the President of the Bulgarian Gymnastics Federation, said his qualification for London would be crucial for both the Federation and the "survival of gymnastics" as a sport in Bulgaria.

After the world championship in November, the gymnasts announced he would focus on the Rings exercise if he qualifies for the Olympics.

Despite his four world titles, he never managed to win Olympic gold.

He won silver in the men's rings at the 2004 Summer Olympics in Athens. In the same Olympic Games, Yovchev won bronze in the men's floor exercise. In the 2000 Olympics in Sydney, Australia, he won the bronze on both floor exercise and still rings. He also won two World Championship Bronze medals in the all-around (1999, 2001).

Yovchev made his fifth Olympic team for the Beijing Olympics in 2008, and qualified again for the Rings exercise. He qualified second under the new scoring system, but missed a handstand and finished the final in last place.

"It hurts that I never won an Olympic gold medal. I am old now, and my chances are down to zero. I doubt I will ever win the coveted gold and I now compete just for pleasure," Yovchev said Wednesday.

Yordan Yovchev Yovchev was born February 24, 1973 in Plovdiv. He coached and trained in Norman, Oklahoma, and Houston, Texas, before moving back to Bulgaria in 2007.