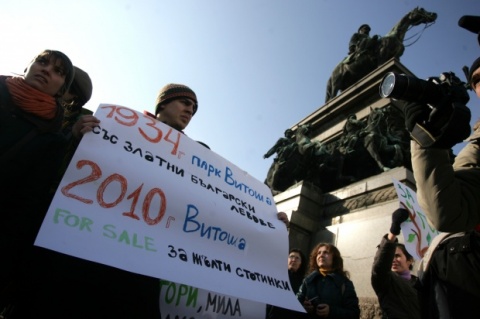 Bulgarian environmentalists and winter sports lovers staged a protest rally in Sofia to voice outrage about new legal amendments that would alleviate construction in the nearby Vitosha Mountain. Photo by BGNES

The first workday of Bulgaria's Parliament, after the winter holiday break, began with a protest rally of environmentalists.

People on bicycles, carryings skis, snow boards, playing music and dancing, gathered in front of the building of the Parliament Wednesday to say firm no to amendments in the Forestry Act. The posters and the slogans were mostly against the offshore company Vitosha Ski and Prime, Minister, Boyko Borisov.

The demonstrators shouted they were against covering Vitosha with concrete in exchange of pennies, and shouted "Mafia" and "Take Concrete out of the Law." The Wednesday rally in Sofia was entirely focused on protection of the nearby Vitosha, but the amendments would involve all Bulgarian mountains.

The amendments are going to be examined by several Parliamentary Committees next week and then will be voted by the Members of the Parliament.