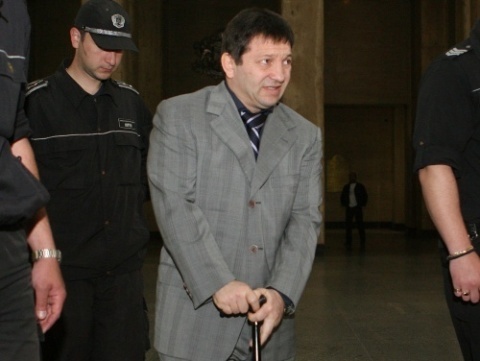 After spending five months behind bars, at the end of June last year Krassimir Marinov was placed under house arrest over health issues. Photo by BGNES

Bulgaria's prosecutors have raised once again drug distribution charges against Krassimir Marinov, one of the notorious brothers called the Marguins, who are believed to be the top crime bosses in the country.

According to the prosecutors the drug distribution network operated from August 2009 till May 2010 in the coastal resort of Sunny Beach. It involved dozens of dealers, but only 14 of the friends of the bosses, who was its leader, will be investigated in this case.

The move comes after Bulgaria's Supreme Cassation Court said in July last year that new evidence have emerged, which however, can not be disclosed because it is confidential.

The ruling concerned the allegation for leading an organized crime group, involved in drugs distribution. It was made because of the testimony of three anonymous witnesses.

After spending five months behind bars, at the end of June Krassimir Marinov was placed under house arrest over health issues.

Krassimir and Nikolay Marinov, also known as the Marguin brothers, reputed to be the biggest mafia bosses in Bulgaria, were acquitted last year of plotting three murders over lack of irrefutable evidence.

Krassimir Marinov pleaded not guilty to the charges, while his brother Nikolay was tried in absentia after he disappeared.

The case has been dragging on for nearly six years already. The Supreme Cassation Court is expected to have the final say.