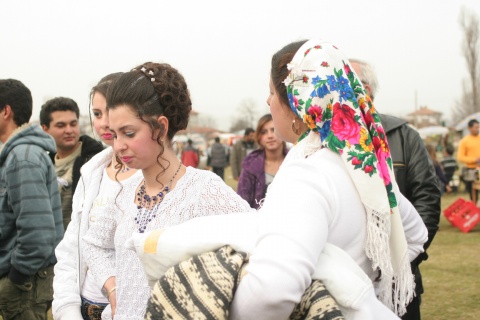 A traditional Roma "bride market" in Bulgaria. Photo by BGNES

An unidentified number of Bulgarian girls, most of them of Roma origin, have reportedly engaged in immigration-related marriage fraud in Egypt.

According to reports of Bulgarian daily 24 Hours, Roma brides have enjoyed tremendous popularity in the country ever since the Arab Spring and the overthrow of President Hosni Mubarak.

Scores of Egyptian citizens were reported to have applied for a visa with the Bulgarian Embassy in Egypt on the grounds of a marriage with a Bulgarian in the past month.

The Bulgarian officials at the consular office in Cairo suspected a scam due to the constantly increasing number of such applications.

All applicants proved to be from the village of Gabria located 50 kilometers northeast of Cairo.

An on-the-spot-check of 24 Hours daily showed that the women had been brought by two men who said that they were businessmen.

One of them was a middle-aged Bulgarian and the other a Libyan national living permanently in Bulgaria.

According to official statistics, more than 30 Egyptian citizens applied for a visa on the grounds of a marriage with a Bulgarian at the end of 2011.

The string of suspicious marriages took place within a short period of time.

The women, aged 20-45, come from different parts of Bulgaria, and were brought to Istanbul by bus, where they boarded flights to Cairo.

Apart from the free trip to Cairo, the "brides" were promised up to EUR 500 to testify that they had gotten married in Egypt.

The wedding ceremonies, if any, were as short as possible and were held in line with the Muslim traditions with a hodja and three witnesses.

Bulgarian officials have said that most of the women involved in the scams have never even sealed a fictive marriage in Egypt but have merely pretended to have done so.

According to preliminary reports, the case involves a crime ring specialized in trafficking in illegal immigrants via Bulgaria.

All similar cases have been reported to the Foreign Ministry and the State Agency for National Security (DANS).

The consular office at the Bulgarian Embassy in Egypt has said that it now examines all documents very carefully but that the visa applicants cannot be considered suspicious a priori.

The decision to grant or to deny a visa in such cases is made by Bulgaria's Foreign Ministry, not by the diplomatic mission in Cairo.