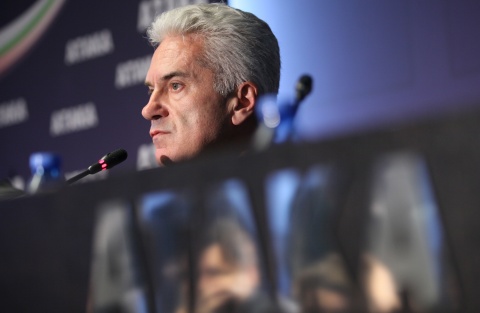 Volen Siderov, the controversial leader of Bulgaria's far-right Ataka (Attack), has reiterated he is in favor of the reinstatement of the capital punishment in the country when it comes to very serious crimes.

Siderov's statement was fueled by the recent case in which three Roma were charged with charged with plotting and contracting three key assassinations.

The alleged mafia bosses are suspected of preparing the murders of Oleg Yanev, prosecutor at the Supreme Cassation Prosecutor's Office, Hristo Varnanov AKA The Pope, Chair of the Supreme Roma Court, and Tsvetelin Kanchev, leader of the Euro Roma party.

On Monday, Siderov said that the alleged mafia bosses should be executed.

"The Pope, the Tsar – these people are criminals who have stolen from us all these years. They should be shot to death instead of being interviewed," Siderov declared in an interview for the TV7 private channel.

The arrested suspects for murder plotting are Lyubomir Iliev-Kadraviq (The Curly), and brothers Georgi Goranov and Vasil Granov. Notorious Roma clan leader Kiril Rashkov, aka Tsar Kiro, is believed to have been their accomplice in the preparations for the killings in the period June-September 2011.

On Monday, Siderov further claimed that the "Roma mafia" has taken over the whole country, pointing out that the ruling centrist-right GERB has won the recent presidential election thanks to votes bought with the assistance of Roma mafia leaders.