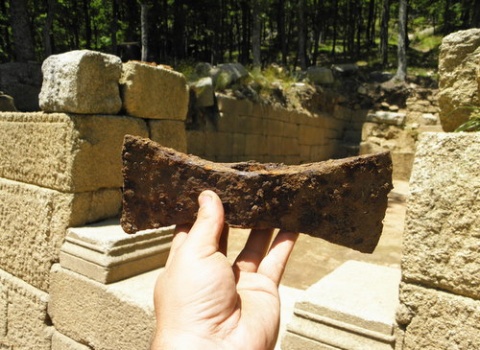 On June 4, Bulgarian archeologists discovered what may have been the oldest settlement in Europe near the village of Yunatsite in the southern Pazardzhik Region. According to Yavor Boyadzhiev, Head of the joined Bulgarian-Greek expedition, the find related to a civilization that existed 6 800 years ago on Bulgarian land, much older than the Mycenaean one.

In September, massive ancient stone anchors were found by divers participating in an archaeological expedition near the southern Bulgarian Black Sea town of Sozopol. The anchors' shape suggests they were used by Creto-Mycanaean, Phoenician or Carian sailors in the 15th-12th centuries BC, which would refute the hypothesis that Greeks were the first Black Sea sailors starting the 12th century BC.

On June 21, Bulgarian archaeologists made crucial discoveries at the residence of the rulers of the Odrysian Kingdom, the state of the most powerful tribe of Ancient Thrace, including details about its sacking by the troops of Philip II of Macedon. The archaeologists discovered in full the northeastern wall of the Thracian kings' residence; it is 13 m long, and has been preserved at a height of 2 m.

The residence is located on the Kozi Gramadi mount in the Sredna Gora mountain, in the village of Starosel, close to the resort town of Hissar in central Bulgaria. In July, Bulgarian archaeologists unearthed an iron labrys, a ceremonial doubleheaded ax, at the same residence.

On June 23, an intact Ancient Thracian tomb was found by archaeologists near the town of Opaka in northeast Bulgaria. The tomb is part of a complex of several Ancient Thracian mounds. According to historians, the discovery is one of the latest burials in Ancient Thrace. One of the most startling discoveries in the newly-found Thracian tomb are six leafs made of gold, part of a golden wreath, together with other golden and bronze decorations, pottery, and glass and bronze cosmetic vessels.

At the end of August, top Bulgarian archaeologist Professor Nikolay Ovcharov has presented new finds from the Ancient Thracian and medieval fortress of Perperikon proving the existence of an Antiquity period sanctuary that he believes could be the ancient Temple of Dionysus.

In 2011, the finds at the Thracian rock sanctuary Perperikon in southern Bulgaria also included a magnificent bronze cross from the 10th – 11th century, a lead medallion with a swastika and Runes' signs.

A Thracian rock sanctuary from the 5th century BC was discovered in August in the Rhodope Mountains by Bulgarian archeologists. The sanctuary is in the "Kaleto" fortress site, near the village of Koshnitsa in the region of the southern city of Smolyan. This is the third Rhodope Mountain fortress with a similar find.

A temple of Ancient Greek goddess Demeter and her daughter Persephone was discovered in May 2011 by a team of Bulgarian archaeologists near the town of Sozopol on the Black Sea. The archaeological team of Prof. Krastina Panayotova found the Ancient Greek temple during excavations on the Skamniy Cape where the archaeologists were exploring a fortress wall and a church that were parts of a Byzantine imperial monastery. The sanctuary is near the monastery complex "St. Apostles and 20 000 Martyrs" built in the first half of the 14th century by Anastasios Palaiologos, brother of the Byzantine Emperor.

New sections of a Roman main street (decumanus) were unearthed during archaeological excavations in the underpass between the Council of Ministers and the Presidency in Sofia in June . In July, a large complex of small Christian churches has been gradually unearthed by Bulgarian archaeologists in downtown Sofia during continuing excavations at the construction sites of the Sofia subway.

In August, a unique Roman mosaic with a stylized crown of laurels from the 4th century AD was found by archeologists in the very heart of the Bulgarian capital. The 30-square-meter mosaic is located underneath the central Maria Louisa Boulevard and was once again discovered during construction works for the Sofia subway.

At the end of 2011, Bulgarian archeologists made a breakthrough discovery in Sozopol – they found the long-sought East Gate of Apollonia Pontica. The precious discovery had been located underneath illegal shacks selling food and beverages in the center of the town. It will allow scientists to recover all fortification systems of the ancient city in their original state.

In July, Bulgarian archaeologists unearthed the main church of a 14th century Byzantine monastery built by the last dynasty of the Eastern Roman Empire located in Sozopol. The archaeologists uncovered the monastery church, a small cemetery chapel, and a feudal castle dating back to the 13th-15th century, the last days before the Byzantine Empire before it was wiped out of the map by the Ottoman Turkish invaders.

In August, a team of Bulgarian archaeologists also including British students unearthed a 13th church at Cherven – a major medieval fortress during the Second Bulgarian Empire that was destroyed during the Ottoman conquest.

In November, a total of 18 gold coins minted by medieval Bulgarian Tsar Ivan Alexander (r. 1331-1371) have been discovered by the team of renowned Bulgarian archaeologist Prof. Nikolay Ovcharov during excavations of the medieval fortress Urvich near Sofia.

In April 2011, Bulgarian archaeologists made a curious discovery: a French perfume was found in the walls of the medieval St. Apostles Monastery in Sozopol, the largest medieval church on the Bulgarian Black Sea coast. The finding was of two glass vessels, apparently walled in much later in the ruins. One of the vessels read "Lubin, Paris, 1882," which turned out to be a quite expensive and fashionable perfume for that time.

In December, modern medical scanners were used to examine the inside and make a 3D image of the alleged relics of St. John the Baptist that were found in Sozopol in 2010. The study was conducted in the Burgas cardio hospital and was filmed by a team of "National Geographic. Earlier in 2011, the relics were moved to the renovated St. St. Cyril and Methodius church in Sozopol.

At the end of the year, Bulgaria's Prime Minister, Boyko Borisov made a controversial statement that archaeologists should stop "blackmailing the State and hurdling highway construction." Borisov's wrath was fueled by a report by Regional Development Minister Lilyana Pavlova that the Shumen Archeology Museum was "sabotaging" the construction of the Hemus highway, along with museums in Pernik and Kyustendil interfering with the construction of the Struma highway in southwestern Bulgaria.