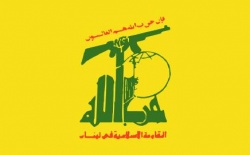 The Hezbollah Flag. Image by Wikipedia.

The level of security in Bulgaria has not been raised due to claims that Hezbollah might be planning attacks on Israeli citizens in Bulgaria, said Bulgarian Interior Minister Tsvetan Tsvetanov.

Earlier Thursday a string of Israeli media published information that Hezbollah is planning such attacks against Israelis across Europe, especially concentrating on tourists to Bulgaria.

Later the Bulgarian secret services released a statement, saying that they have no information to that effect.

"At the present moment there is absolutely nothing that mandates raising the level of security in Bulgaria," said Minister of Interior Tsvetanov in a separate statement.

He went on to assure that security services are operating under their regular alertness regime, and under full contact with their Euro-Atlantic partners.

Tsvetanov also said that the matter was coordinated with Bulgarian PM Boyko Borisov and Minister of Transport Ivaylo Moskovski.

Thursday the Haaretz paper quoted an Israeli government official saying that the government has asked Bulgaria and other countries to up security measures to protect Israeli citizens on their territories.

The Walla! website has said that the planned attacks are in connection with the February 12 anniversary of the killing of Hezbollah leader Imad Mughnieh.

The Russian Israeli website IzRus has gone as far as to claim that the information about the attacks was disclosed to Israeli services by their Bulgarian counterparts.