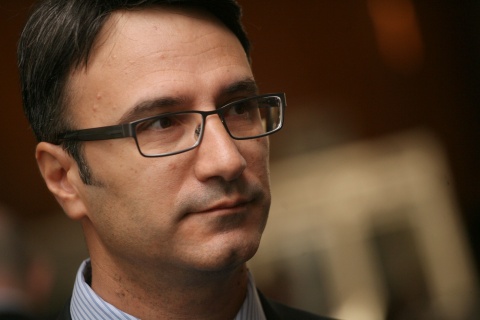 Traicho Traikov, Minister of Economy, Energy and Tourism, has said that building a seventh unit at the Kozloduy NPP is the cheaper and wiser option to building a new nuclear power station in Belene. Photo by BGNES

The construction of a seventh unit at the Kozloduy nuclear power plant may start before the end of the GERB government's term in office, according to Traicho Traikov, Minister of Economy, Energy and Tourism.

"The wiser, the cheaper and the more logical thing to do would be to build a seventh reactor on the ground of the Kozloduy NPP than to build a new plant in Belene," Traikov said in a Thursday interview for the morning broadcast of the Bulgarian National Television (BNT).

He announced that the preliminary results of the stress tests at the Kozloduy NPP had shown that there was nothing to worry about, with just recommendations for some small improvements.

Traikov listed as priorities the life extension of reactor blocks 5 and 6 at the Kozloduy NPP, the development of alternative energy sources, energy efficiency and a diversification of gas supplies through the construction of gas grid interconnections.

He further noted that the place designated for Belene NPP was suitable for all other sorts of manufacturing business except a nuclear power plant.

"There will be something in Belene, after all," Traikov remarked, without giving any details.

He added that the government of the center-right GERB had grown more independent in its approach to the talks with Russia on the Belene NPP project.

Regarding the looming strike at Maritsa Iztok Mines AD, Traikov stood by the side of the management of the state-owned coal mining company.

The executives of Maritsa Iztok Mines AD refused to increase bonus payments on the grounds of the output spike in 2011.

Traikov admitted that the profit of the coal mining firm had risen to BGN 19-20 M over the past year but insisted that this was by far not a colossal increase.

"The average salary at Maritsa Iztok Mines AD is BGN 1550, while my Deputy Minister earns BGN 1520 a month," he declared, adding that the miners had already received a 15% pay rise in the summer of 2011, which was an outstanding figure given the times of crisis.

The Energy Minister assured that power supply would not be disrupted even if the workers at the state-owned company went on strike because thermal power plants had coal reserves for several weeks.

Traikov refused to commit to any economic growth forecasts but noted that he trusted moderately optimistic scenarios for the development of the economy in 2012.

He said that his agenda included administrative burden reduction, improvement of the business climate and simplified procedures for granting loans to small and medium-sized enterprises, while other ministers' portfolios featured infrastructure and e-government.

"Reforms in the judiciary are also necessary but this is beyond the powers of the government," Traikov concluded.