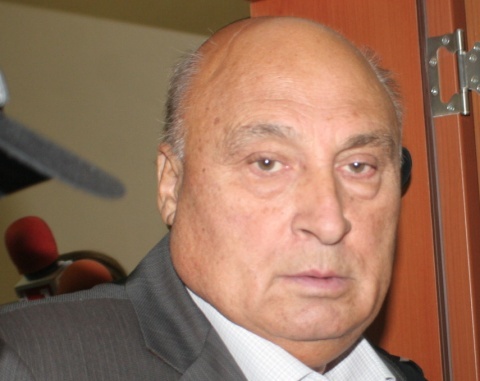 Kiril Rashkov (pictured) is accused of threatening to kill one of his fellow villagers. Photo by BGNES

The defense council's request to release Rashkov on house arrest or bail was rejected. The rule is final and cannot be appealed.

The Roma clan leader is accused of threatening to kill one of his fellow villagers, Veselin Hristev, on September 23 2011, in the village of Katunitsa near Plovdiv.

The Plovdiv magistrates decided that there is a real possibility that Rashkov can hide and/or commit another crime.

A witness testified how Tsar Kiro told him he wanted to leave Bulgaria and settle in neighboring Serbia. As far as the possibility to commit another crime, the magistrates cite the gravity of the crime and the long rap sheet of the defendant.

Rashkov's lawyer insists that his client suffers from diabetes and has had several heart attacks. However, the Court pointed out these ailments date from a time long before his arrest and his current condition is not so serious, so it would be acceptable to keep him in jail. The magistrates further noted the inmate can be taken to the hospital from prison, if needed.

On December 22, the district court in the town of Asenovgrad also ruled that Tsar Kiro will remain in custody until January 23 when the trial against him is set to be launched.

On September 23, a van driven by members of Rashkov's Roma clan deliberately ran down and killed 19-year-old ethnic Bulgarian Angel Petrov in the village.

This provoked the ire of villagers and citizens across Bulgaria. Throngs gathered in front of Rashkov's illegal luxurious estates in Katunitsa and set them aflame.

The events sparked nationwide protests against what many saw as the inaction of the state against bosses in the organized crime world. Far-right groups were quick to gather in the major cities, marring the protests with racist slogans.

In December, the Roma boss managed to once again anger a crowd of fellow villagers by flipping them off as he entered the district court in Asenovgrad. On the next day, the Regional Prosecutor's Office in Asenovgrad announced that it has launched pre-trial proceedings and a probe against Rashkov on hooliganism grounds.