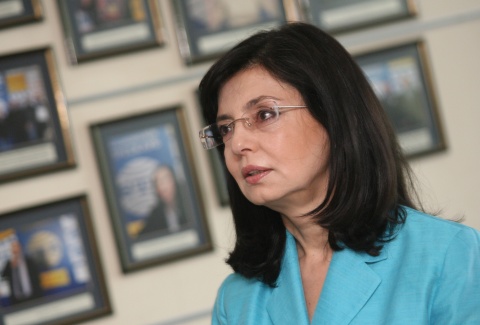 Meglena Kuneva, former EU Commissioner and independent presidential candidate at the end-October presidential elections, has vowed to make "the voice of citizens" in Bulgaria audible. Photo by BGNES

Meglena Kuneva, former EU Commissioner and independent presidential candidate at the end-October presidential elections, has vowed to change the tone of politics in Bulgaria towards an increasing audibility.

"The 21st century will be a century of another type of government, of finding consent, of another way of practicing democracy. We must not underestimate the citizens' voice," she stated in a Thursday interview for private TV channel bTV.

The former EU Commissioner announced that she would make her first major proposal regarding the appointment procedure at the Constitutional Court (KS) as early as January, adding that "the right person at the right place can steer the country on a good course".

"I shall waste no time. Despite the fact that I am not in Parliament and I am not promoting the stance of a certain party, I am expressing my own personal views and a responsibility for the things I stand for," Kuneva emphasized.

She further noted that she would continue to behave the way she was behaving, which had won the trust of the people.

"I started with a promise - I ran in the elections without forgoing what I said. This is how I plan to continue to behave. These people voted because what I said coincided with their persuasions and because I kept my promises," she stated.

The former EU Commissioner for Consumer Protection explained that she was willing to hold talks with party leaders and intended to do this very soon.

She said that she had become Chair of the European Citizen Action Service NGO as of the beginning of 2012.

The former EU Affairs Minister went on to dwell on the recent events in Hungary, describing them as "extremely dangerous".

"What is happening there is typical of bad governance - the voice of only one party is being heard and the opposition had no influence," Kuneva argued.