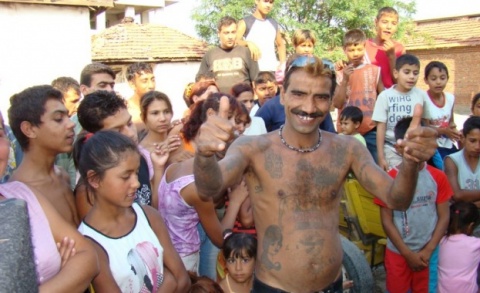 Roma pose for before media in Plovdiv's Stolipinovo, the largest Roma quarter in Bulgaria. Photo by Cross

Entire Roma quarters from the Bulgarian city of Plovdiv are moving to Germany, France, or Switzerland, according to a report.

The Plovdiv Roma are seeking better life in Western Europe, with Switzerland being the latest hit destination among them, according to local newspaper "Maritsa".

In Switzerland, the Bulgarian Roma would often seek asylum in refugee camps for Kurds where they could get shelter, food, and EUR 600 month as political refugees.

They usually seek asylum claiming discrimination in Bulgaria, explains Yashar Asan, head of a Initiative Committee of People in Want.

In his words, 20 richer Roma families from Plovdiv's Adzhisan Mahala emigrated to Switzerland the past 2 months, even though some of them are already expected to be extradited by plane by the Swiss authorities.

In Stolipinovo, the largest Roma quarter in Bulgaria with a population of some 40 000, the German city of Dortmund is a dream place. According to Asan, there are five buses with 50 people each setting off to Dortmund from Stolipinovo every day.

Asan claims that 500 families from Stolipinovo, which makes 3000-5000 people, have emigrated to France and Germany in the past ten years, with men being employing primarily in the construction sector, while many of the women become prostitutes.