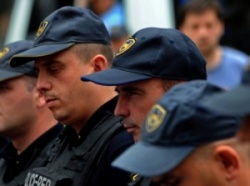 A group of Serbian tourists have started a mass brawl in Ohrid as part of their New Year trip.

The accident took place on New Year's Eve in a bar in the Macedonian city, Bulgarian private TV station bTV reported on January 02.

The Serbians assaulted a local and hit him with a bottle.

Security guards stepped in only to take the fight outside, where the row continued.

The injured Macedonian was taken to hospital.

Local police arrested 15 in connection with the brawl and one is still wanted.

Last year, a Serbian citizen died after being beaten by a group of Macedonians.

The police identified the suspects involved in the fatal beating and they are still undergoing trial.