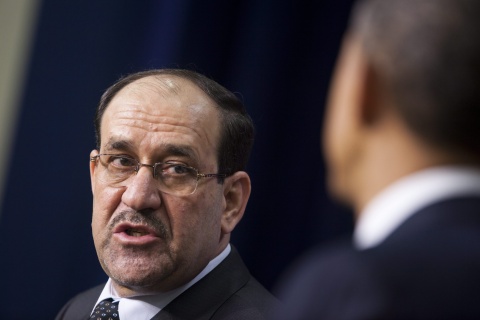 Iraqi PM al-Maliki with US President Barack Obama in DC in December 2011. Photo by EPA/BGNES

Iraq's Prime Minister Nouri al-Maliki has turned December 31 – the day of final withdrawal of US troops from the country – into a national holiday.

Iraq's prime minister said Saturday the end of the American military presence in Iraq is a new dawn for his country.

In a celebration in Baghdad broadcast on state-run Iraqiya TV, Nouri al-Maliki declared the day a national holiday.

Al-Maliki told the Iraqi people that the country has become free and called upon them to preserve its unity and sovereignty.

The prime minister praised Iraqis for getting rid of Saddam Hussein and ending the sectarian conflict. He said now Iraq is focused on rebuilding the country.

The Second Iraq War or Second Persian Gulf War started with the 2003 invasion of Saddam Hussein's Iraq in March 2003 by the USA under President George W. Bush and "the Coalition of the Willing."

In eight years, the war that cost the lives of 4 500 Americans and tens of thousands of Iraqis, turning into a guerrilla insurgency after the Bush Administration send in US troops to topple the dictatorship of Saddam Hussein, arguing the notorious Iraqi dictator had weapons of mass destruction that could end in the hands of terrorists.