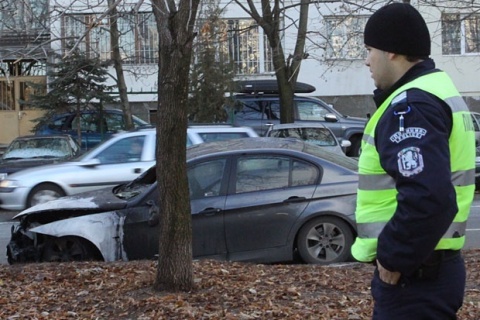 Four automobiles were set on fire in Bulgaria Friday into Saturday – two in the central town of Nova Zagora and two in the town of Aksakovo, near the Black Sea city of Varna.

The police precinct in the city of Sliven received a call around 8:45 pm Friday that two cars were seen burning on "Tsar Ivan Asen II" street. Police established that both were set on fire by one individual, who remains unknown and at large. Both cars belonged to one owner and were parked in front of his house.

Firefighters extinguished the blaze around 9:30 pm. Both cars are damaged, but there were no injuries. The probe is continuing and a pre-trail procedure had been launched.

Three people have been arrested over the Aksakovo arsons, several hours after the crime was committed.

Police there received a call that two cars with Varna title plates were burning on the "Slavi Doychev" street in the town. Police established that both belonged to a couple living on the same street and that the fires were arson.

G.D., 48, an individual with a long criminal record was arrested several hours later. After te first arrest, police detained two of G.D.'s former cellmates. The probe established that the three traveled to the couple's house and the arson was contracted by G.D. over some business dispute.

A pre-trail procedure has been launched in this case as well.

Mysterious car arsons started occurring in the beginning of December and by the end of the year there number grew to over 60, after incidents spread from Sofia to other cities and towns.

Police say that the arsons are committed by several groups with different motives and some have been copycat criminal actions. Others believe the arsons are set on purpose by an unknown, but powerful mastermind in order to destabilize the cabinet of the ruling Citizens for European Development of Bulgaria party, GERB.

Three out of the 63 suspects nabbed in Sofia were kept behind bars for longer time, but the Court released all of them over the lack of evidence.