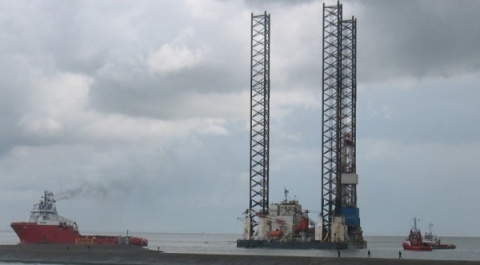 The Kolskaya floating platform which has completely sunken in the Sea of Okhotsk. Photo bshippingexplorer.net

The towing operation of the oil platform "Kolskaya," which capsized on December 18 in the sea of Okhotsk, had been carried out with large-scale safety violations, which caused the fatal sinking.

These are the conclusions from the probe of Russia's Far East Transport Prosecutor's Office, cited by bTV.

According to the license, issued by the Russian Federation Naval Registry, the platform could not be transported in winter conditions – a special permit was needed for that and it had never been obtained.

The minimum safety capacity on the platform was listed at 20 people, including the captain, while 67 were on board at the time of the tragedy, among them workers who were dealing with repairs, which at the time had concluded.

The Prosecutor plans to press charges against the Port Administration in Sakhalin, the shareholder company "Avia Shelf," and the Federal Unit "Gosmorspassluzhba" for failing to coordinate their actions during the rescue effort.

Only 14 out of the 67 survived the sinking after being rescued. Bulgarian national Zhivko Zhekov, who worked on the platform as a representative of the British insurance company "Noble Denton," was among the casualties.