Bulgaria Under Code Yellow over Snow 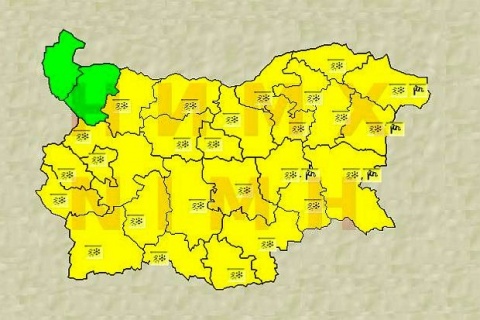 Only the Regions of Vidin and Montana are excluded from the warning of heavy snow and ice in Bulgaria before New Year's Eve. Map by BAS

Code yellow has been declared for almost all Bulgarian regions (26 out of 28) Saturday over the forecast for snow and icy roads.

The minimum temperatures will be between minus 4 and plus 1 degrees Celsius, while the maximum – from minus 1 to plus 4. The snow will begin to subside in the evening from west to east. New Year's Eve will be windy and cold.

The precipitations in eastern Bulgaria will be of rain, but will turn into snow before stopping.

Traffic police are advising drivers to use caution and to avoid travels unless absolutely necessary.