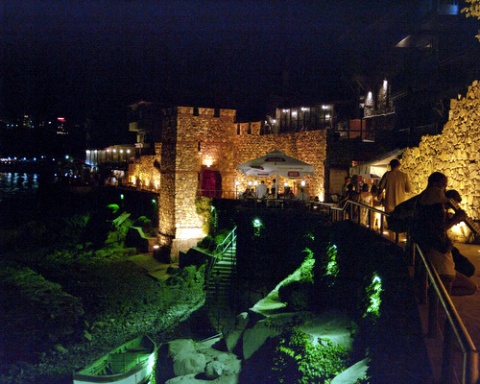 Sozopol's South Tower and wall and panoramic alley at night. Photo by Novinite.com

Bulgarian archeologists made a breakthrough discovery in the ancient Black Sea town of Sozopol – they found the long-sought East Gate of Apollonia Pontica.

The precious discovery had been located underneath illegal shacks selling food and beverages in the center of the town. It will allow scientists to recover all fortification systems of the ancient city in their original state. This, in turn, will attract more tourists from the country and Europe.

After clearing the shacks, which invaded the center of Sozopol for years, archaeologists now have a chance to explore the last missing part of the fortress walls of the ancient city. Although damaged by locals, using them for building material for their houses, the walls reach a height of nearly 7 meters. This, according to archaeologists, makes them the largest fortifications found in Bulgaria.

"There is no original so well preserved, at least in Bulgaria. Even in Veliko Tarnovo the walls are smaller in height, "said Tsonya Drazheva - head of the excavation expedition, which is financed by Foundation Sozopol.

As early as half century ago, French archaeologists have been searching for Apollonia's ancient East Gate. The recent discovery even impresses older residents of Sozopol, who are already hoping for more tourists.

The biggest surprise for archaeologists was to find, just a day ago, at the fortress' entrance, a church from the 5-6 century, for which there is no historical data whatsoever.

"Perhaps it was burned and destroyed in the 10th century during the campaigns of John Tsimishiy in the conquest of Preslav" suggests Tsonya Drazheva.

The church is just a few meters away from the restored, with funds from the State budget, "St. Cyril and Methodius" church, where the relics of John the Baptist are kept. The investment of BGN 2 M was reimbursed with money from pilgrims in just months, while there have been nearly a million more visitors.

With the new find, Sozopol reaffirms its position as a pilot project of the government to develop year-round tourism on the Black Sea Coast.