In N Korea, Salutes and Cries at Kim's Funeral March 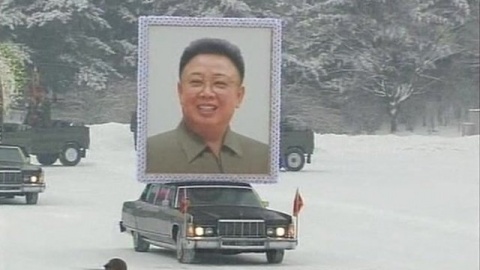 The three-hour funeral procession was led by a limousine bearing a huge portrait of a smiling Kim Jong-il. Photo by BBC

An imposing procession in North Korea’s capital Pyongyang marked the start of the funeral services for late leader Kim Jong-il as the world is watching for signs of a power struggle in the nuclear-armed pariah state.

Footage showed tens of thousands of soldiers with their heads bowed as a giant portrait of Mr Kim was carried slowly through the streets.

His successor and third son, Kim Jong-un, walked beside the hearse, images from state television showed.

He has been lying in state for the past 10 days.

No schedule was released ahead of the commemorations and no foreign delegations are attending.

But observers said the ceremonies echoed the displays of pomp and military might that marked the death of Mr Kim's father, Kim Il-sung, in 1994.

Kim Jong-un - who is thought to be in his late 20s and who has little political experience - was shown weeping beside the hearse as it drove through the snowy capital.

He was accompanied by his uncle, Chang Song-taek, who is expected to be a key player as the younger Kim consolidates power.

Ri Yong-ho, the army chief, also accompanied the hearse as it drove past ranks of troops.

The three-hour funeral procession was led by a limousine bearing a huge portrait of a smiling Kim Jong-il. The coffin was draped in a red flag and surrounded by white flowers.

As it passed by, crowds of mourners wailed and flailed their arms as soldiers struggled to keep them from spilling into the road.