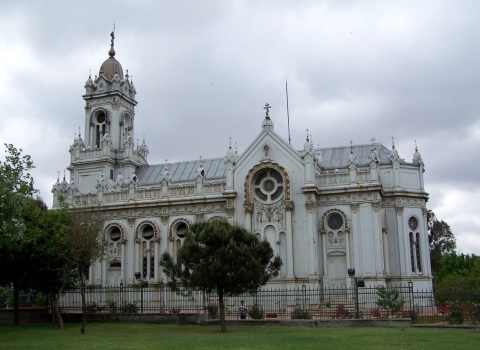 The Bulgarian "Saint Stephen" Church in Istanbul, Turkey, is the only cast-iron church in the world. Photo by wikipedia

A number of schools and organizations across Bulgaria are taking part in a large-scale donation campaign titled "Let's Preserve the Bulgarian St. Stephen Church in Istanbul."

The Bulgarian Church in Istanbul is celebrating Tuesday the day of its patron.

The campaign is organized under the initiative of the Foundation "Bulgarian Orthodox Temple St. Stephen in Istanbul."

The goal is to collect enough funds to fully restore the Church's iconostasis, which had not been touched in the last 113 years.

The restoration includes applying of a new gold leaf, accurate reconstruction of the damaged segments of the iconostasis, cleaning and preservation.

The project will be carried out by Turkish specialists in the restoration of historic monuments, while Bulgaria will send an expert in the field as observer. The amount needed to implement all stages of the restoration of the iconostasis is estimated at EUR 75 000.

The Church was inaugurated in 1898 by Exarch Joseph and marks the beginning of the Bulgarian exarchate. It is also the main worship place of Bulgarian Christian Orthodox in Turkey.

The St. Stephen Day mass is traditionally attended by high-ranking Bulgarian clergy, by Orthodox Bulgarians, living in the city, and Bulgarian tourists.

Last year, the dome of the church was gold-plated thanks to a donation of Bulgarians from Plovdiv. Bulgarians living in Istanbul now say the church is the only one in the city having a gold-covered dome.

Four years ago, St. Stephen was declared the most beautiful church in Turkey. Architects call it a unique building. It is also the only cast-iron church in the world.

Right before Christmas 2010, the Istanbul City Hall announced it will use municipal funds to repair the temple.