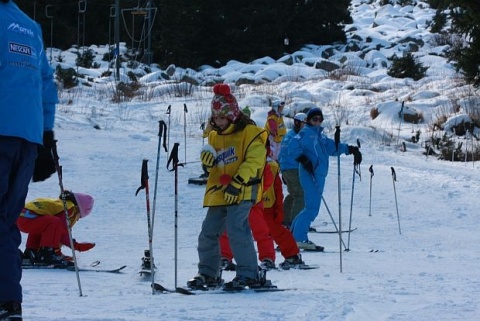 Children skiing in Vitosha Mountain nearby Bulgarian capital Sofia, after the local company declared it will not open facilities for the season. Sofia Photo Agencies

Earlier in December, the Vitosha Ski company, which manages facilities on the mountain, had announced that it will not open them this season, as the government obstructed its activities.

After protests by environmentalists, the Bulgarian government had repealed permits issued to Vitosha Ski to enlarge the ski area on the mountain, which is a protected natural park.

Hundreds of skiers, snowboarders and mountain lovers were present at Monday's event, backed by the "For the Nature" environmental NGO coalition.

According to people who were at the Aleko ski station on Vitosha, they wanted to show that people could engage in skiing without the aid of companies such as Vitosha Ski.

They also argued for a balance between active human use of natural resources for recreation and respect for nature.

"Bulgarian authorities have turned a blind eye to this illegal cartel agreement, thereby forcing an increasing number of Bulgarians to go abroad to practice the sport," the environmentalists add.

Later Monday, Vitosha Ski announced a counter-statement dismissing the event as marginal and arguing that no meaningful tourism can occur if the state obstructs tourism companies.