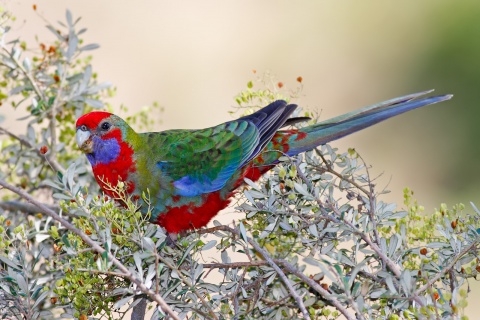 The colorful rosella parrot, a rare species, stems from Australia. Photo by Wikipedia.

Bulgarian border police have detained some 1,750 pet parrots and 60 porcupines Monday at the Kapitan Andreevo checkpoint from Turkey.

The live animals were transported by Bulgarian citizens traveling from Turkey to Slovenia, who had declared a much lower count of heads.

Most of the parrots are from the cockatiel and the various lovebird species, but 55 of them have been found to be from the protected rosella species.

Those were protected by the Convention on Internatoinal Trate with Endangered Species.

The rare birds have been transported to the rescue office of the Green Balkans eco-organization at the Sofia Zoo.

The rest are housed at the Kapitan Andreevo border crossing, with all due Bulgarian environmental and judicial authorities being informed about the case.