Wilders Wants to Kick Bulgaria, Romania Out of EU 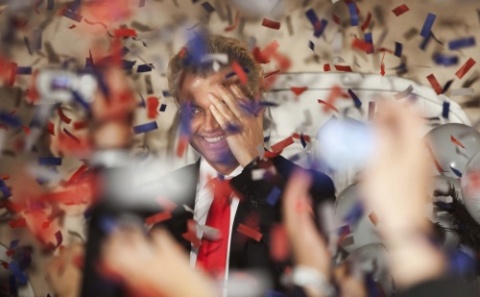 PVV leader Geert Wilders (C) celebrates the amount of seats he won in the parliament on 09 June 2010, the day of the General Elections in the Netherlands. Photo by EPA/BGNES

Far-right Dutch "Freedom Part", led by controversial politician Geert Wilders, wants to kick Bulgaria and Romania out of the EU, according to its deputies.

During a plenary session in the Dutch Parliament's Chamber of Representatives on Saturday, Ino van den Besselaar, a Freedom Party deputy, declared his formations position regarding Bulgaria and Romania's EU membership, as cited by bTV.

Ino van den Besselaar spoke on the free movement of workers in the EU.

In his words, Bulgaria and Romania became EU members in 2007 without having fulfilled the membership criteria.

He said that should not have been allowed to happen, and that if it were up to the Dutch Freedom Party Bulgaria and Romania would be kicked out of the Union immediately because of their severe problems with corruption and organization crime.

In the past Dutch parliamentary election, the PVV (Party for Freedom) won 24 seats, making it the third largest in Parliament, which paved the way for it to become an important partner of the ruling coalition, albeit without ministerial seats.