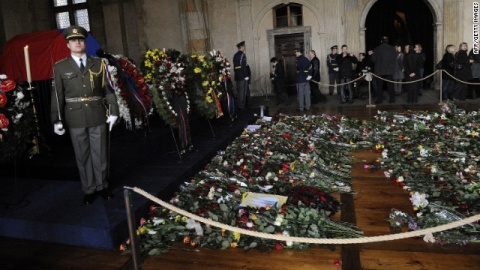 Soldiers stand next to Havel's flag-draped coffin, ahead of his funeral. Photo by CNN

As Czechs and world leaders paid an emotional tribute to the country's late former president, Vaclav Havel, some of his close friends were the visible absence at the funeral ceremony on Friday.

Former dissident and Havel friend Petr Uhl refused to come to the funeral, saying Havel was not a Christian and no other president of Czechoslovakia had had a state funeral of this kind, CNN reported.

Former political adviser Jiri Pehe told CNN he is not sure Havel was even baptized.

Vaclav Havel, who helped lead the 1989 overthrow of communism in Eastern Europe, died on Sunday aged 75. His funeral, in St Vitus Cathedral in Prague, is the first state funeral the Czech Republic has held since independence.

Sirens sounded across the city to herald the start of the ceremony on Friday afternoon.

A bell then tolled at St Vitus Cathedral, as mourners in the building and those filling the square outside observed a moment of silence.

The former US Secretary of State, Madeleine Albright - who was herself born in Prague - spoke at the ceremony, along with Czech Foreign Minister Karel Schwarzenberg and current Czech President Vaclav Klaus.

US Secretary of State Hillary Clinton and her husband, former President Bill Clinton, are among the mourners.

The presidents of France and Germany are also attending, along with UK Prime Minister David Cameron.