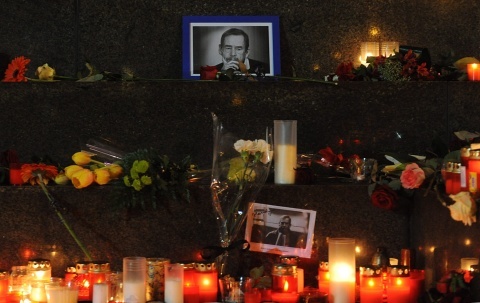 Candles are placed at the Venceslav Square to commemorate the death of former Czech president Vaclav Havel, in central Prague, Czech Republic. Photo by BGNES

Czech people and leaders from around the world are attending Friday the funeral of former Czech President Vaclav Havel in Prague.

Havel, who is called the hero of the Velvet Revolution, and led the 1989 overthrow of communism, died on Sunday at the age of 75, after a serious illness.

The list of official guests includes US Secretary of State Hillary Clinton and her husband, former President Bill Clinton, the Presidents of France and Germany, British Prime Minister David Cameron, Poland's own dissident-turned-president, Lech Walesa, and many current leaders from across Eastern Europe.

The funeral mass will take place at St Vitus Cathedral, and will be celebrated by the Archbishop of Prague, Dominik Duka. According to BBC, this will be the Czech Republic's first State funeral since independence.

Former US Secretary of State, Madeleine Albright, herself born in Prague, and a close personal friend of Havel, is to speak at the ceremony, along with Czech Foreign Minister, Karel Schwarzenberg.

The coffin has been lying in state at Prague Castle since Wednesday. Thousands stood in line to pay their respects.

The funeral ceremonies will be aired live on large screens at Prague Castle and in Hradcany Square.

A minute's silence will be held at noon across the Czech Republic.

Vaclav Havel became president of Czechoslovakia in 1989 after the fall of communism. He remained Czech leader until 2003.