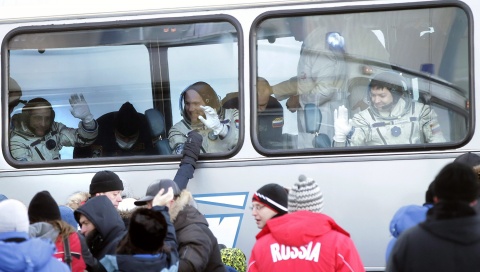 US astronaut Donald Pettit (L), Russian cosmonaut Oleg Kononenko (R) and Dutch astronaut Andre Kuipers (C), after the reporting to the Russian Space official before the launch of the Soyuz TMA-03M spacecraft at the Baikonur cosmodrome in Kazakhstan. EPA/B

The launch took place on schedule at 13:16 GMT with Russian Oleg Kononenko, the Netherlands' Andre Kuipers and Don Pettit of the United States on board, DPA reported.

They will join American mission commander Dan Burbank and Russians Anton Shkaplerov and Anatoli Ivanishin, who departed Earth for the ISS on November 21.

A link-up between the Soyuz transport module and the ISS would take place at 1623 GMT on November 23, a statement from the Russian national space agency Roscosmos said.

The six astronauts aboard the ISS will perform 'standard' station research and maintenance, with the agency saying it considered the past difficulties involved in keeping the ISS manned to have now been fully resolved.

Kononenko and Shkaplerov are scheduled to perform a space walk in February.

The next supply flight to the ISS, by a Russian Progress automated transport vehicle, is scheduled for January 26.

A US-built Dragon supply module is scheduled to arrive in February, and a European automated transport module launched from French Guiana is planned to travel to the ISS in March.

The next manned mission with one US and two Russian astronauts is scheduled for March, a NASA statement said.

An August launch of an unmanned supply module for the ISS carried by a Soyuz booster failed catastrophically, raising questions about the rocket's capacity to deliver manned missions to the station safely.

Since the July retirement of the US Space Shuttle, Russia's Soyuz booster is the only means by which astronauts can reach the ISS.